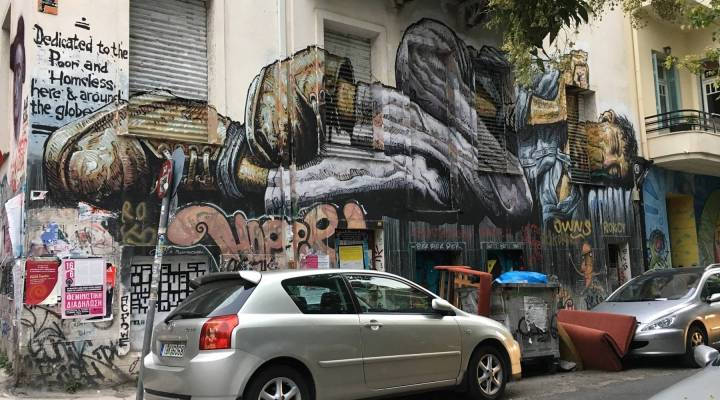 COPY
Graffiti in the Exarchia neighborhood of Athens offers a message of support for refugees and migrants.  Ryan Kailath/Marketplace

Graffiti in the Exarchia neighborhood of Athens offers a message of support for refugees and migrants.  Ryan Kailath/Marketplace
Listen Now

I’m touring an abandoned public school in Athens when a little Syrian boy nearly takes my eye out with his fidget spinner. He whispers “sorry” and scuttles off. The boy is one of the only Syrians I meet who will speak into my microphone — the others are wary of being recorded.

“Abandoned” might be the wrong word for this school. It closed during the worst of the country’s 2010 debt crisis, and today is home to about 400 Syrian refugees who are squatting in the building. The classrooms are now dormitories; laundry dries on the jungle gym.

Greece has received more than one million refugees since 2015, many Syrian, and hundreds more arrive each week. While the European Union has provided more than $800 million in aid since then, Greece is struggling to handle the sheer numbers. Now some help has come from an unlikely source.

“We try to find buildings that are abandoned from the state, to give them life,” said my guide for the day, Tasos Sagris. He’s a local artist who looks like a middle-aged Dee Dee Ramone, complete with dark jeans and long hair. Sagris is also an anarchist. He’s lived for decades in the graffiti-covered Exarchia neighborhood of Athens, home to record shops, hipster cafes, and about 3,000 refugees, squatting in abandoned government buildings. Sagris said the anarchists were the first Greeks to give them housing.

There are now more than 10 buildings in the neighborhood occupied by refugees. The anarchists help them reconnect the water and electricity. “The water belongs to the people,” Sagris said. “We just make it truly public. It’s not stealing, it’s re-appropriation.”

The anarchists know how to occupy an abandoned building because they’ve been squatting in Exarchia for years. They moved in during the 1980s, when the neighborhood was the center of anti-government protests. Then, during the debt crisis, they used their know-how to help Greek citizens who had lost their homes.

Brad Blitz, professor of international politics at Middlesex University, said novel humanitarian protection systems flourished during the debt crisis, and were then in turn mobilized to aid refugees. It’s not just anarchists either, Blitz said. Greek laborers and trade unionists also took lessons they learned in the crisis and applied them to helping refugees. Laid-off port workers, for example, used their connections to obtain old shipping containers and turn them into housing or storage.

“There are strong cultural precedents for this in Greece,” Blitz said, referring to extended conflicts in the early 1900s when huge numbers of Greeks were forced to leave their homes. “You have this strong collective memory of displacement, and it’s a national phenomenon in Greece. They hold very strongly to this identity that they themselves had been refugees.”

The Greek government, with EU funding, runs about 40 refugee camps around the country, but people there said conditions are terrible. Eva Cossé, a researcher for Human Rights Watch who has interviewed scores of refugees inside and outside of camps, said there are frequent fights and fires in the camps. In winter, refugees sleep in tents under the snow. Cossé said that refugees in camps feel like animals in a cage. “Refugee camps are perpetuating the trauma of war and displacement,” she said.

Cossé said conditions in the anarchist squats are much more humane. There’s little violence or crime, and refugees have better access to food, sanitation, and medical services. Their kids are in local schools, and they feel like they are a part of society. Sagris said that was one of the anarchists’ main motivations.

But he adds that for the anarchists, their work with refugees is just one step toward their ultimate goal — wholesale revolution. They want a society without money or government. Sagris realizes his goals sound radical now, but believes they’ll one day be the norm.