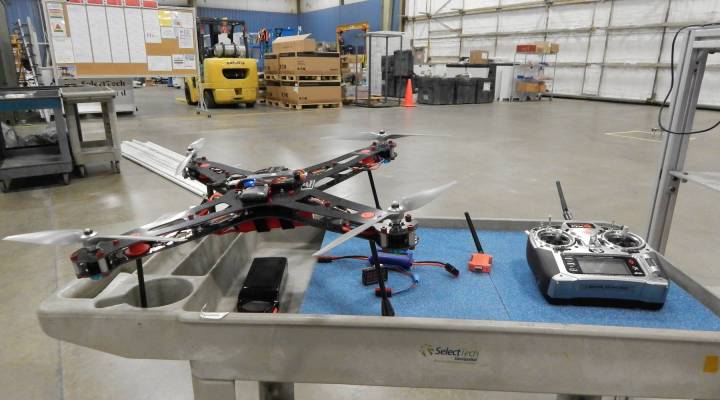 COPY
A test drone ready for flight at SelectTech Geospatial, a small high-tech manufacturer in the city of Springfield, Ohio. Lewis Wallace

A test drone ready for flight at SelectTech Geospatial, a small high-tech manufacturer in the city of Springfield, Ohio. Lewis Wallace
Listen Now

UPDATED, Tuesday, Dec. 30, 2013: The Federal Aviation Administration chose Alaska, Nevada, New York, North Dakota, Texas and Virginia as the first testing grounds for commercial drones. Governments, businesses, farmers and others are hoping to use drones in the near future.

Dayton, Ohio had hoped to become a federal testing range but was passed over as a drone test site. The FAA says the selected locations together provide the necessary climatic and geographic diversity for testing.

The FAA’s plan for integrating drones into national air space includes an evaluation of safety, environmental impacts and privacy issues.

Beafore says some uses for unmanned aerial vehicles, or UAVs, could be just a couple years out.

In the company hangar at Springfield Airpark, Beafore shows off a UAV that looks sort of like an insect, with four helicopter blades and four spindly legs.  The drone lifts off smoothly from the warehouse floor and passes over our heads, creating a little breeze and hovering in midair like a bird in the wind.

“The economic benefit is really only limited by our imagination,” says Maurice McDonald with the Dayton Development Coalition.

Ohio expects to bring in more than $2 billion from drones by 2025, with people here working to build, test and research them. This area could use the boost — it’s been battered by the loss of manufacturing jobs.

And Chris Ford, with the Dayton Development Coalition, says the sites selected this week are like batting cages in baseball.

They’re great for warm-up, but it’s not the real game.

“The real game starts after we’ve got the UAS systems integrated into the national air space,” says Ford. “We have a few years to focus here within the region to get ready for that ball game and step out onto the field and really try to win some of these jobs.”

But not everyone around here wants commercial drones to rule the skies.

“I don’t like it when machines take over,” says Teresa McKenzie, a Springfield resident. “It would be very weird.”

As UAVs get smaller, and cheaper, many people are worried about privacy, which is one of the reasons the FAA is taking its time on regulations.

“I certainly don’t want ‘em flying over my house,” Beafore says. But he emphasizes surveillance is not what his UAVs are about. The first uses will probably be agricultural, checking crops for mold or standing water.

And what’s a few candid pics of Ohio’s cornfields?

The Silicon Valley of Drones? from Marketplace on Vimeo.