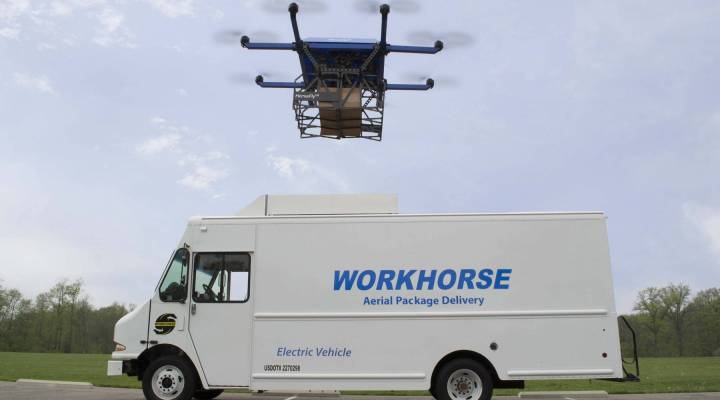 Businesses that want to use drones have had, up till now, to get special permission from the Federal Aviation Administration. But starting today, the FAA is loosening the rules a little bit.  You can now get a commercial drone pilot’s license and be on your way, but you can’t go higher than 400 feet, and you can’t fly the drones further than you can see them.

One of the Workhorse drones (called a ”horsefly”), which the company is testing.

Some businesses are trying to work within these rules. One is a company called Workhorse, which makes electric delivery trucks for companies such as UPS and FedEx.  They’re testing drones to help deliver packages down long driveways, for instance.

“Say you have five deliveries to the right, and one delivery a mile to the left,” said Workhorse CEO Steve Burns. “Give the one delivery to the left the bird, go on and do your five, and it’ll catch up with you.”

One of Andy Shen’s racing drones, which can go up to 80 miles an hour.

Burns believes we’ll see drones delivering packages within the year. And the increased visibility of the machines could mean more people turn into drone aficionados — like Andy Shen. His company, Shendrones, makes racing drones.  We watched him fly a small racing drone that can reach speeds of about 80 miles an hour.

“Everyone dreams of flying,” said Shen.  “It’s a very primal urge, and this really satisfies it.”