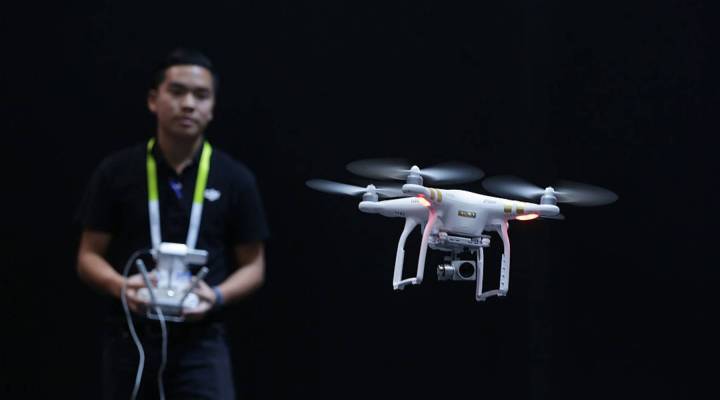 If the FAA reverses itself, and allows commercial drone aircraft to fly over populated areas, what will that look like? Will there be pilot-less planes whizzing through the air, landing in parking lots and back yards to drop off packages? Ella Atkins, associate professor of aerospace engineering at the University of Michigan, said probably not at first. It’s not possible right now because of range.

“If you have a warehouse that’s several miles from where you need to deliver the package, can it actually get there?” she asked.

Most big warehouses are in rural areas and drones today can fly only about 10 miles. But, technology aside, regulation will also limit them.

“As of right now, there’s almost no accountability,” he said. “You know, if a drone comes crashing through my window right now, I have no way of tracking down whose it is, anything like that.”

“Drones, right now, they look so alien and strange and intimidating, and they’ve got this camera eye on them,” he said. “It’s a visceral reaction.”

So, what’s the timeline? The FAA says developing and validating a regulatory scheme is going to take time because people want to do different things with drones. Google and Amazon said they’ll have drone delivery in a couple of years. Logan Yliniemi says five years is more likely, but the companies are itching to phase out humans because of cost.

“Absolutely,” he said. “Drones tend to be a lot cheaper. They don’t require food or health insurance.”