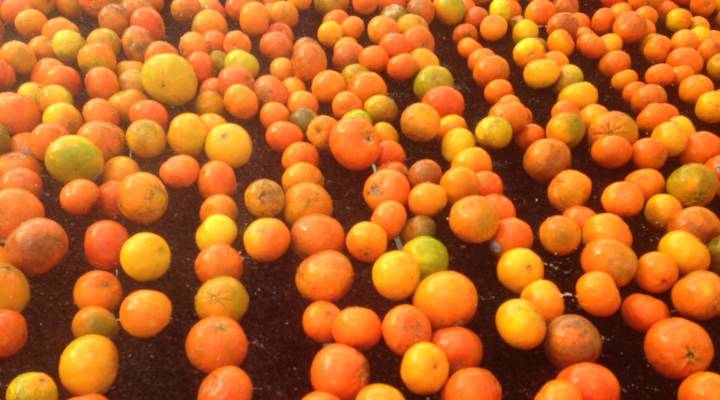 How a little Asian bug is crushing the U.S. OJ business

COPY
Oranges are cleaned before being sliced in half and squeezed into juice at the Peace River Citrus Products processing plant in Bartow, Fla. Stacey Vanek Smith

How a little Asian bug is crushing the U.S. OJ business

Oranges are cleaned before being sliced in half and squeezed into juice at the Peace River Citrus Products processing plant in Bartow, Fla. Stacey Vanek Smith
Listen Now

Orange farmer Mark Wheeler is scouting for disease in his grove of Valencia orange trees near the town of Dundee in Central Florida. A small red tractor with a giant fan attached to it grinds its way along the white sand rows between the trees. It’s spraying nutrients onto the leaves.

“It kind of helps bring the tree around and gives it a little shot in the arm,” explains Wheeler.

The spray is being used to help fight a disease called greening. Greening is a bacteria that’s transmitted from tree to tree by a mosquito-like bug called the Asian Citrus Psyllid. The bacteria grows inside the tree and blocks its arteries until the tree starts having trouble moving nutrients from leaf to root. Eventually, over several years, the tree starves to death. Wheeler says greening has devastated groves throughout the state.

“It is just taking areas out completely and killing the trees,” he says.

Wheeler points out an infected tree. It has patches of shriveled, yellowing leaves that are the hallmark of greening, as well as small, misshapen fruit that falls easily off the tree.

“We are losing trees, losing crop, losing yield,” says Matthew Salois, chief economist with the Florida Department of Citrus.  He says since greening was discovered in Florida about eight years ago, orange production in the state has falled by half. Moreover, because of treatments like the nutritional spray, the cost of producing those orange has doubled.

“In an effort to combat greening and care for the tree and maintain its health for as long as possible, growers are taking on added costs,” says Salois.

That has been hard on the companies that buy the oranges and squeeze them into juice, like Peace River Citrus Products, which produces juice for Coca-Cola’s Simply and Minute Maid brands, among others. At its processing plant in Bartow, Florida, oranges are trucked in from groves all over the state, taken up a giant elevator where they are cleaned, sliced and squeezed into millions of gallons of juice every day.

“When I got into the business in the late 1980s, there were 30 companies in the citrus processing side of the business,” says Peace River CFO Andrew Taylor. “Today there are 7.”

Taylor says greening means farmers have less fruit to sell, and the fruit they do have is often smaller, less sweet and more expensive.

“Those changes can wipe out your margins unless you’re in a position where you’re managing that price risk,” says Taylor. One way Peace River is managing that risk is by using the futures market. Processors can buy contracts to deliver orange juice–pre-paying months in advance to lock in a price and, hopefully, a profit. But the greening disease is affecting that market, too.

“Trading right now in OJ is the smallest I’ve seen it,” says James Cordier, a commodities trader with Liberty Trading Group who has been buying and selling orange juice contracts for 20 years.

Cordier says the market usually rallies when there’s a freak storm or a freeze because those events motivate processors to lock in prices for the next season. But as Florida’s orange production has steadily declined, the number of orange juice contracts has fallen, too. At the same time, dwindling crops have pushed the price of juice we buy at the store way up.

“Orange juice is one of the most expensive items a purchaser can bring out of the grocery store,” says Cordier. “What’s happened in orange juice consumption over the last two years is that it’s fallen off dramatically.”

But we still love our juice: Americans consume more than half a billion gallons of OJ every year. Companies want to make sure they’ll have enough oranges to meet that demand, so some have started growing their own. Coca-Cola is teaming up with Peace River to plant 25,000 acres of orange groves, which should help Coke control costs and production at a time when many orange growers are going under.

Farmer Mark Wheeler says he’s not worried about Coke becoming a competitor. In his grove in Dundee, Florida, he shows off thousands of new plantings. But, as we’re looking over the rows of chest-high orange trees, Wheeler sees signs of greening.

“See how light the leaves are on this branch? The greening really comes into display here. There’s one over there as well. Lot of fruit on the ground already.”

Wheeler says greening has changed the economics of the entire orange juice business and has even forced his family to sell some of their groves. He says his family will never stop growing oranges, but they have diversified. They’re farming trees for timber and they’ve even started growing peaches.