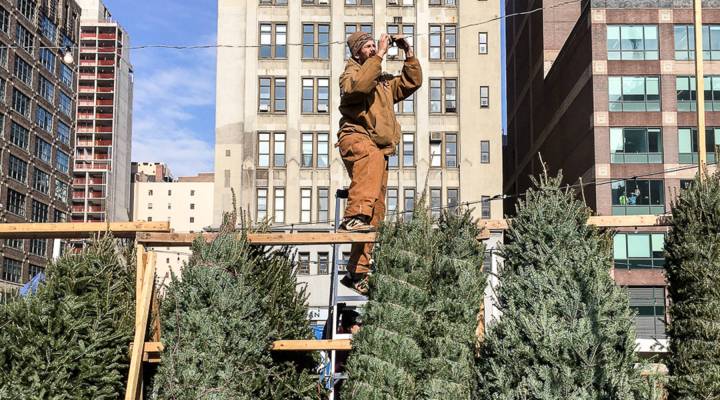 December’s been a busy month at Marketplace, what with the passage of the Republican tax plan and other news in our wheelhouse. Which is why we didn’t realize until a few days before Christmas that there were no holiday decorations in the office at all.

I drew the short straw for going out to fix that.

Luckily for me, you can’t walk two blocks in New York City this time of year without running into a Christmas tree for sale. They pop up after Thanksgiving on sidewalks and street corners and empty lots.

These little pine-scented forests feel entirely out of place in New York, but Danny Abbott, originally from Alabama, fits right in.

“I was called ‘mountain man’ on the train last night,” Abbott said. “I look like a lumberjack, I guess.”

Abbott, who has a bushy red beard, is wearing long overalls and a knit cap. But he’s a few steps down the supply chain from lumberjack — Abbott’s a tree man.

Every winter, hundreds of tree sellers descend on the city; seasonal workers from across the U.S. and often Canada. Most of the year Abbott’s a stonemason, but his work is slow in the winter, so he turns to selling trees.

“This is great,” he said. “This is like going to the casino with five bucks and walking out with $500.”

Abbott lives in Queens, but a lot of traveling tree sellers live in Winnebagos outside their stands. They’re open 24 hours a day, running a generator at night and handling every part of the business: hawking trees, trimming, wrapping and delivery. And then there’s the unforeseen duties.

“I had to chase a guy down one time with a tree, he tried to steal a tree,” Abbott said. “A little short guy, couldn’t run fast. I just took his feet out from under him.”

Abbott earns a monthly wage for the sales, marketing and loss-prevention duties. But the real money comes from tips on deliveries — he says he earns $40 on a bad day, $200 on a good one.

Abbott’s been doing this for four years, at various stands around the city. Each one is very different, he said.

“The guy I worked for before, he was a scumbag,” Abbott said. “This guy here’s great, he’s one of the best bosses I ever had.” Scott Lechner is the street boss of this stand, Soho Trees.

“[Street boss] means I’m in charge of the day-to-day operations of the Christmas tree locations that we run,” Lechner said. “Seven locations in Manhattan.”

Lechner’s been in this business 36 years, and he said that this year, the tree game is tough. The growers he buys from planted fewer trees during the recession, and now there’s a shortage, which is driving up costs down the line, from grower to lumberjack to freight driver. Christmas trees cost Lechner 225 percent of what they did three years ago, he said.

Soho Trees has raised prices between 5 percent and 10 percent to help cover the costs, Lechner said. This year, a six-foot tree might run you $100, even $140. But shoppers are used to paying what they’ve paid, and they won’t spend much more. Lechner said at least recruiting workers hasn’t gotten any harder.

“We interview over 750 to 800 candidates for about 50 jobs every year,” Lechner said. “A bunch of adventurers and tree zealots!”

Before I leave there’s just one last thing to do — for $40, this late in the season, I pick up a three-foot tree. Walking it 10 blocks back to the Marketplace office draws smiles and stares, and I expect my co-workers to be thrilled.

As I walk out of the elevator and enter the office, I register shock on the face of our office manager, Eva Fryscak.

“Yes,” she replies. “But who is going to throw it out next week?”