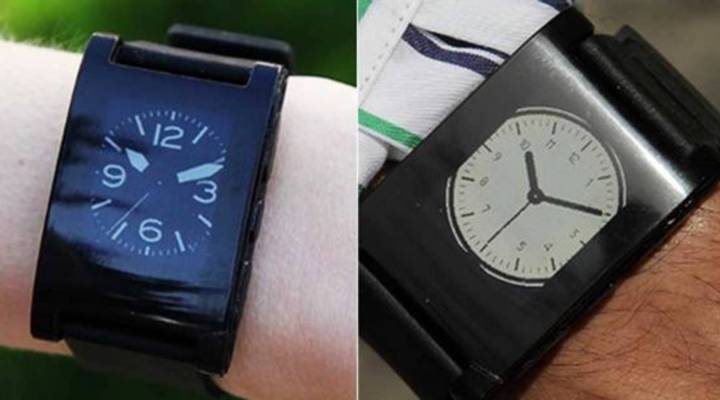 In wearable tech, products designed for the wrist could have the upper hand

COPY
The Pebble (pictured above), a so-called smartwatch, could have some company soon - Samsung is predicted to announce their version of the smartwatch on Wednesday. via getpebble.com

In wearable tech, products designed for the wrist could have the upper hand

The Pebble (pictured above), a so-called smartwatch, could have some company soon - Samsung is predicted to announce their version of the smartwatch on Wednesday. via getpebble.com
Listen Now

Tech companies are all on wrist-watch these days: Google is reportedly getting ready to release a smartwatch, Samsung put out the Galaxy Gear watch a few weeks ago. There’s also a Sony SmartWatch on the market and Apple is reportedly close to coming out with a smartwatch of its own. No question about it, the wrist-wars are upon us.

“I love the idea of when I get an email alert, to be able to see it on my wrist without having to take out my phone or unlock my screen,” says Tara Calishain, editor of ResearchBuzz.

That ease of use is behind the growing market for wearable technology. “The body is the next landscape for personal computing,” says Sarah Rotman-Epps, senior analyst at Forrester Research. And the wrist is the first frontier. A survey from Forrester found 29% of adults would wear a sensory device on their wrist, but only 12% were comfortable wearing something like Google Glass. But comfortable may not be enough.

“As a woman I can say, if it weren’t my job to wear these products, I would never do it,” says Rotman-Epps. The reason? Right now smartwatches look a lot like those watches from the 80s that had little calculators on them, which is  a huge problem, says Debra Kaye, partner at Lucule Consulting. “Something that we put on our bodies is part of our status, it’s part of who we are,” says Kaye. And no one really wants to be the 80s calulator watch person.

But that also means that once tech companies get smartwatches right, the payoff could be huge. “The wrist is like the Holy grail for wearable technology,” says Kaye. “If you can get something on the wrist, you can really own a person’s body.” In other words, says Kaye,  the technology will become part of our identity, not just something we carry around.

It seems the future of tech really is all in the wrist.