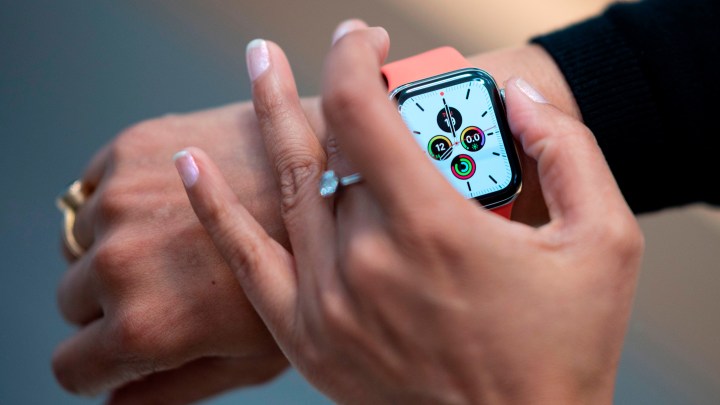 COPY
Some smartwatches and other wearable devices have been found to provide early COVID-19 warning signs. Johannes Eisele/AFP via Getty Images
COVID-19

Some smartwatches and other wearable devices have been found to provide early COVID-19 warning signs. Johannes Eisele/AFP via Getty Images
Listen Now

Necessity and invention — we know they go hand in hand. When a crisis like the COVID-19 pandemic hits, innovators can come up quickly with products and ideas, including products designed for entirely different uses.

Like wearables, which are being used to detect early COVID-19 signs instead of simply counting daily steps.

A new paper, representing early findings of an ongoing study, has found that among people wearing Oura brand smart rings on their fingers, 50 were diagnosed with COVID-19.

“For 38 of them, they had really clear episodes of a fever associated with elevated heart rate and increased respiration rates, but before they were reporting it,” said Benjamin Smarr, data scientist at the University of California, San Diego. Smarr is the lead author of the paper in the journal Scientific Reports.

Predicting disease would be an unintended feature of the Oura device. And smartwatches and fitness trackers have also been found to provide early COVID warning signs, with strong data correlations, even for patients with no symptoms who can nevertheless spread the disease.

“We need to identify people as early as possible, before they really have a chance to spread the virus to their family, friends or colleagues,” said Giorgio Quer, director of artificial intelligence at Scripps Research.

Quer has co-published a separate study in Nature of wearables that appear strongly predictive of COVID-19 based on patterns of resting heart rate, activity level and quantity of sleep. Both publications are based on limited data and are part of broader, ongoing studies.

Wearable devices can also monitor social distancing. And this may just be the beginning for the public health uses of this consumer technology.

“Consumer wearable device makers and smartwatch makers are absolutely going to get into doing more of this,” said Robert Furberg, who studies technology and public health at the nonprofit RTI International. “There’s this compelling altruistic argument. And, I think, people will be interested in buying these devices.”

For now, different types of people who work in close quarters are trying out early warning smart devices in conjunction with researchers. The workers include nurses, retail and casino employees, and professional athletes.