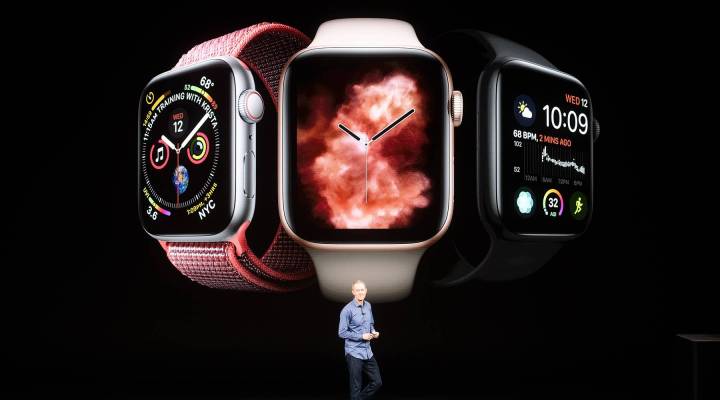 Among the updates during Wednesday’s Apple keynote were some changes to the Apple Watch. Series 4 of the smartwatch will come with price tag starting at $399, and will include a bigger screen, thinner body, and new health tracking capabilities including a better heart rate monitor. But one feature that hasn’t received as much attention is the watch’s new “fall detection capabilities.”

According to Apple, the watch “can detect that you’ve fallen … and you can easily initiate a call to emergency services or dismiss the alert.” This could potentially influenced the multi-billion dollar industry for personal emergency response systems. These systems and devices usually show up in popular culture connected to the famous ads for Life Alert. Customers pay upfront and monthly fees for the services, as well as for rental equipment.

The Centers for Disease Control says 3 million older people end up in the emergency room every year for fall injuries, and with the aging baby boomer population, the market for devices to help people “age in place” is expected to continue to grow.

Jeffrey Kessler at Imperial Capital, who follows this industry, said Apple is a particular threat to the businesses that rely on pedant-style alert devices connected to base stations in the home. “There’s no question about it,” Kessler said. “ If you are pendent dependent and with a call station behind you to monitor that pendent, you know the answer is that Apple remains a threat.”

But some of those companies say they don’t feel threatened just yet. Howard Teicher is director of business development at Medical Guardian, which recently released its own smart watch connected to its service.

“I think by the time it has actually developed,” he said of Apple’s new technology, “we’ll have developed the similar technology that’s more relatable to what our customers actually need.” Teicher argues many older people might be overwhelmed by the multiple apps and options on an Apple Watch, which he points out does not include the call center support of the traditional services.

But others are leaning on the Apple Watch to change the way people think about emergency alert devices. Surgeon Shea Gregg launched the FallCall app after years of working with geriatric patients, and the app runs on the Apple Watch. He said many of today’s seniors would prefer the aesthetics of the Apple Watch over say, a plastic button hanging around their neck.

“It’s imperative that we make sure that we offer them solutions that they are not embarrassed to wear, that they’re proud of,” Gregg said. “That helps make life easier when it comes to emergency contacts and situations.”

Gregg’s team at FallCall has been working on its own “fall detection” software to run on the Apple Watch.