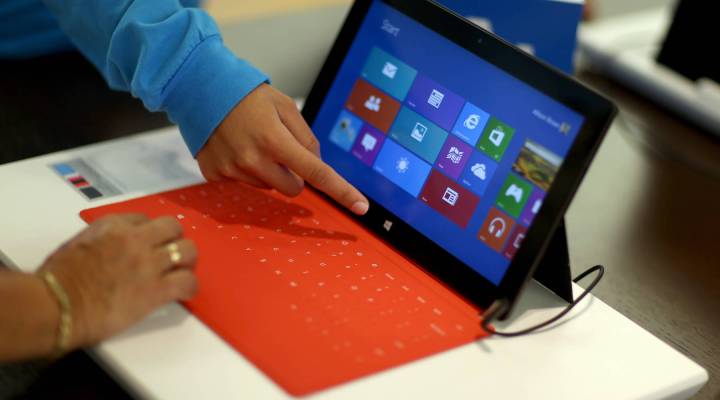 New iPad: Not the only new tablet out there

COPY
Microsoft Product Advisor Daniela Belevanon (R) points out the functions on a Windows Surface tablet as she helps Marta Aranda shop for a tablet loaded with the Windows 8.1 operating system at a Microsoft store in the Dadeland Mall October 17, 2013 in Miami, Florida. Joe Raedle/Getty Images

New iPad: Not the only new tablet out there

Microsoft Product Advisor Daniela Belevanon (R) points out the functions on a Windows Surface tablet as she helps Marta Aranda shop for a tablet loaded with the Windows 8.1 operating system at a Microsoft store in the Dadeland Mall October 17, 2013 in Miami, Florida. Joe Raedle/Getty Images
Listen Now

Apple, Microsoft, and Nokia are all releasing new tablets today.

All of the tech companies want to be tablet king.

“The tablet market, in general, has been one of the most explosive tech segments we’ve ever seen,” says Tim Bajarin, a tech consultant with Creative Strategies. Bajarin says tablet sales are expected to surpass PC sales this year. Also, people replace them more frequently, so brand loyalty pays off much sooner.

Apple still dominates the tablet market; more than a third of tablets sold are iPads.

“There is a whole generation of people who find computers intimidating,” says Rene Ritchie, editor of tech blog iMore. “They would buy a computer from Best Buy and have to have the neighbor’s kid come and show them how to use it. That’s the market Apple still dominates: the mainstream market.”

Still, there are lots of niche markets opening up, says Ritchie, including business tablets, low cost tablets and tablets for kids.

“This is probably going to be the most exciting market for the next five years,” says Ritchie, who predicts Apple will lose the market-share crown thanks to challenges from Google, Microsoft, Samsung, Nokia, and even Amazon.