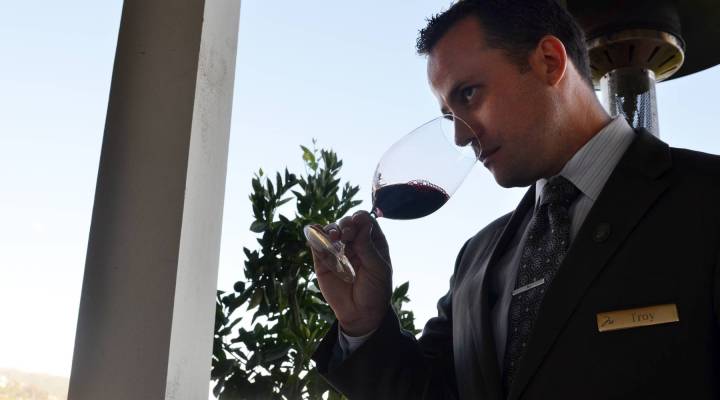 Troy Smith is about to take one of the hardest tests in the world.  Imagine having to know everything about wine theory, history and geography:

Take that information and use it to assess a wine and identify its vintage, grape variety, and region.

And still, most of the Master Sommelier candidates know they’ll fail this three-day oral exam. The pass rate is roughly 8 percent.

Most of the wine is stored in a temperature controlled room. Inside the room, there are bins of wine from places like Napa Valley, Calif., New Zealand, France, Australia and Italy.

Smith knows every detail about the wine types and brands. Is there a hint of black plum or lemon? Does the wine have oak in it?  What’s the texture of the wine?

“You just smell and tastes a lot of fruits,” Smith says. “And spices and start trying to focus on that and build that sense memory.”

It’s a sense memory, he believes, that gets tested daily by working in the restaurant atmosphere at the Montage. And part of the difficulty of the sommelier test is that it is completely oral.

There are no multiple choice questions. There are no pencils. There is no fill in the blank portion. Passing means performing, like a sommelier has to do in a restaurant.

“The reason they do the theory portion orally because that’s how it is done on the floor. A guest doesn’t come in and ask you a question and you say ‘let me go look that up’,” Smith says. “You either know it or you don’t.”

He says he’s tasted tens-of-thousands of wines in the last several years that will help him prepare for the exam.  At least, 20,000 he says. Smith is already an “advanced sommelier,” one step below the master’s rank.

Just in time for summer… you can impress your friends without spending a lot of money.

Only advanced sommeliers are invited to take the masters exam administered by The Court of Master Sommeliers. The first such test was held in 1969 in England.

And as evidence of its low passage rate: There are only 133 master sommeliers in the United States.

“We have our good days and bad days as tasters,” explains Shayn Bjornholm. He passed the Master Sommelier exam in 2005. Now he’s the exam director. “Sometimes our ‘schnauzes’ are working.  Sometimes they are not.”

On average, Bjornholm says, salaries can increase from $65,000 a year with an advanced degree, to $95,000 for a Master Sommelier.

Bjornholm says the most difficult part of the exam involves testing wine knowledge in a time sensitive manner.

Imagine walking into a room. There’s a table with three glasses of white wine and three reds. There’s no wine bottle, no wine label. The clock starts as soon as a sip has been taken. You have 25 minutes to assess what’s in the glass.

“If I see this, smell this, or taste this in conjunction with each other, what does that mean this wine really is?” Bjornholm says.

He says there’s a practical reason behind this blind tasting.

“It’s not to look cool or show off,” Bjornholm says. “It really is to try to figure out what typical wines taste like and from there be able to launch into which are the more valuable ones for the money you want to spend.”

And in today’s wine climate, sommeliers are increasingly in that role of guiding customers’ wine tastes and purchases.

“It is one of the hardest exams that humanity has ever created,” explains Jason Wise, a filmmaker who spent more than two years filming the documentary, “Somm,” about the test. “And I’m trying to figure out if it is necessary.”

Somm followed four candidates as they prepared for the masters’ examination.

“The thing that I saw that knocked me off my feet was them take a glass of wine and deductively break it down based on the soil types and the tannins and the acidity in the wine,” Wise says. “And for the normal person wine is something that is not complicated. It is either expensive or cheap.”

The sommelier is critical, especially in the United States, which is the biggest wine consuming market in the world. Last year, American consumers bought more than $34 billion worth of wine.

“Everyone is conscious right now of: Where does my food come from? Where do my ingredients come from?,” Wise says. “If I’m going to go out and it is my anniversary and I want to try something new, but I want it to be great and the night to be perfect. I want the best sommelier there is, and I’m telling you these guys and gals are the best.”

On the patio of Montage Laguna Beach’s Studio restaurant, Troy Smith guides customers. The menu has several recommended wine pairings that come from Smith and the team of sommeliers who work at the Montage. Customers can access more than 2,200 types of wine labels. But Smith often waits for a customer to ask for advice about pairing and price.

“Go ahead and make whatever menu selections that appeal to you and then we will go through a couple of different options and to give you an idea of what wines you do or don’t like,” Smith says. “And a particular price range and we will go from there.”

For Smith, if he passes the exam he intends on sharing a bottle of wine with his wife: Probably a Bordeaux from France, a deep red purple wine with hints of cedar and dried rose.