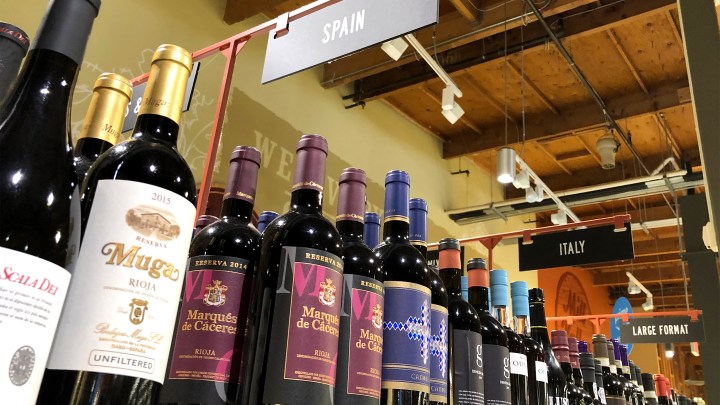 COPY
Wines imported from Spain and Italy for sale at a Whole Foods outlet in California. U.S. tariffs on European wine and liquor may increase. Justin Sullivan/Getty Images
Trade showdown

Wines imported from Spain and Italy for sale at a Whole Foods outlet in California. U.S. tariffs on European wine and liquor may increase. Justin Sullivan/Getty Images
Listen Now

In case you’ve forgotten, there’s still a trade war going on. And this week, the U.S. trade representative could decide to quadruple tariffs on European wine and spirits, from 25% to 100%.

The tariffs were first imposed last year amid a dispute over European aircraft subsidies. But in the time since, the alcohol industry has been feeling the pinch.

“Prices are still going up,” Ascencios said. “I can see they’re significantly higher.”

With the pandemic and the prospect of higher tariffs, Ascencios said she’s importing less wine, simply out of caution.

“At this point, my hands are up in the air,” Ascencios said. “What else can happen at this point?”

Alcohol distributors often rely on European imports to keep their lights on because the profit margins tend to be higher than on domestic products, said Erik Segelbaum, a sommelier and founder of Somlyay, a hospitality consultancy.

“In order to have a diversified portfolio where they can even represent American wineries, they’ve got to be making money on European wineries,” Segelbaum said.

Wholesalers and distributors can absorb some of the costs of tariffs, but when those costs get passed along, Segelbaum said, they’re likely to hurt another industry that’s already in crisis: restaurants.

Wine and liquor are often treated as luxury items, and consumers are uncertain about spending on luxuries in the middle of a pandemic, said Tom Pirko, president of Bevmark, a food and wine consultancy.

“Everybody’s suffering,” Pirko said. “You go to the root of the matter, and it comes down to consumers being able to have what used to be a little affordable luxury, and now they can’t.”

Reuters reports that a bipartisan group of 13 senators has asked the U.S. Trade Representative’s Office to remove the tariffs. The decision is likely to come this week.