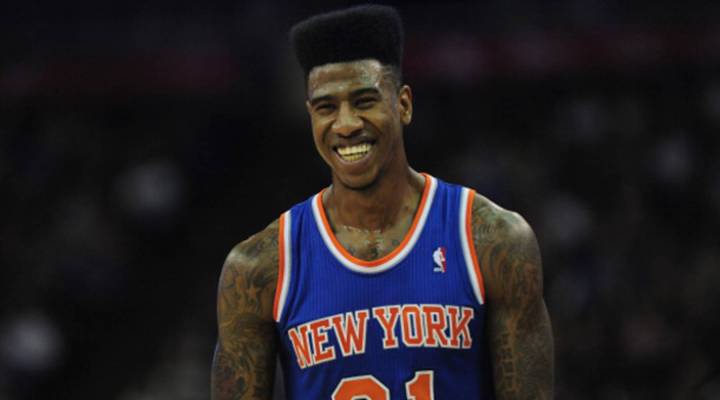 If you watched any basketball this season, you might have noticed a new hairstyle gaining popularity. Well, it’s kind of an old hairstyle, actually: The hi-top fade. It was the ‘do to have back in the ’80s, and now it’s cropping up on the likes of Iman Shumpert of the New York Knicks, Norris Cole of the Miami Heat and celebrities like Usher.

At Against Da Grain Barbershop in Staten Island, barber Sean White says when he started cutting hair 27 years ago, the hi-top fade was all the rage. “The sides are usually faded very close and then the top is like a pencil eraser,” he says. “It goes straight up, and it’s usually flat on the top.”

The hi-top fade took the hip-hop community by storm. Big Daddy Kane, Salt-N-Pepa, Will Smith all had one. Rapper Kid of Kid ‘n’ Play had a hi-top fade that stood 10 inches high. White says he started noticing kids asking for the cut a few months ago. “I think the mohawk is almost done, and now everybody’s getting the flattop,” he says.

Part of the reason is that the style is very workable in the workplace, says New York style guru George Brescia, “If you are in finance or are in business, how do you rock the mohawk?” he says. “I think this has sort of evolved out of the mohawk, and this is a very versatile haircut.”

Brescia says subtler versions of the hi-top fade can work on almost anyone. He says Robert Downey, Jr. has a version, and so does Kai Ryssdal. Thirty-year-old university administrator Malkam Dior’s high top fade is five inches tall. Dior chose the style because it made a statement and had a professional feel. But the hi-top fade is a job in itself. “There’s gel, there’s mousse, there’s a blow dryer, there’s a hot comb,” Dior says. “It’s hard to maintain, and it costs a lot of money and it’s a lot of work.”

Dior spends $500 a month on product and weekly shape-ups and 45 minutes styling it every morning. The masses don’t seem fazed by the maintenance. Barber Sean White says he does four or five a week. “I love doing it. That’s my era. I grew up wearing that, and I grew up learning how to cut hair on that type of haircut.”

Plus, White says hi-top fades stand out, which is good for business. “Everybody looks at it and asks: ‘Who did that?’ So, it helps me out.” Oh, the importance of buzz…