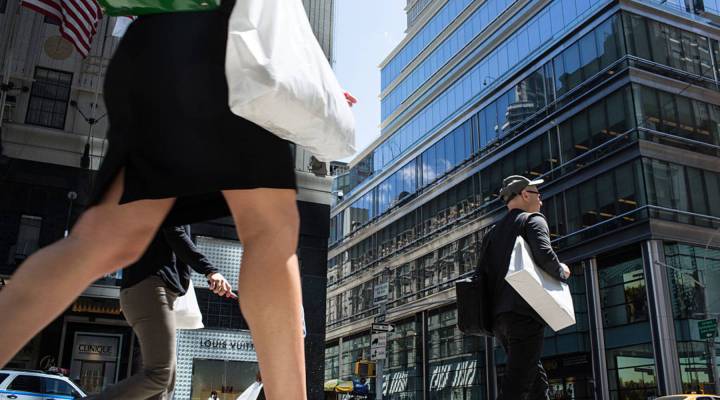 COPY
Shoppers walk along Lexington Avenue in the eastern Midtown section of Manhattan on April 29, 2015 in New York City. According to the Federal Reserve Bank, growth of the U.S. gross domestic product - the value of goods and services produced in the U.S. - has slowed for the first quarter of 2015.   Kevin Hagen/Getty Images

Shoppers walk along Lexington Avenue in the eastern Midtown section of Manhattan on April 29, 2015 in New York City. According to the Federal Reserve Bank, growth of the U.S. gross domestic product - the value of goods and services produced in the U.S. - has slowed for the first quarter of 2015.   Kevin Hagen/Getty Images
Listen Now

The Commerce Department reports that gross domestic product (GDP) for the first quarter of 2016 rose 0.5 percent on a seasonally adjusted annual basis. That compares to 1.4 percent GDP growth in Q4 2015, and 2.0 percent GDP growth in Q3 2015. Today’s report is the preliminary estimate of Q1 2016 GDP; the figures will be revised twice more, as more complete data become available.

The U.S. economy was buffeted by a range of troubles in the first quarter, including turmoil in leading global economies; volatility on domestic and foreign equity markets; the strong U.S. dollar, which makes U.S. exports more expensive abroad; and the crash in world oil prices, which has idled oil fields and oil-field workers across the U.S. Plains States.

Some bright spots were also in evidence in the data, including robust expenditures on housing and home remodeling, more construction activity (especially in multi-family housing), and strong spending by state and local government.

Several data-points in  the preliminary GDP report are cause for worry about the possibility of slower growth in coming quarters, including:

• Investment by business, in new equipment and factories, fell nearly 5.9 percent, more than at any time since the recession ended;
• Exports fell 2.6 percent;
• Consumer spending overall rose just 1.9 percent, compared with 2.4 percent in Q5 2015 and 3.0 percent in Q3 2015. Spending on goods rose 0.1%; spending on services (including health care and utilities) rose 2.7 percent.

Economist Paul Ashworth at Capital Economics in Toronto said economic conditions have been improving since the period covered in the Q1 2016 GDP report.

“We had some headwinds on the economy from the drop in mining investment, triggered by very big falls in oil prices last year,” said Ashworth. “That should begin to fade. More recently, the dollar appears to have stabilized. So the contraction in exports should fade in the second half of the year.”

Most economists, including Ashworth, are still predicting that growth will pick up to approximately 2.0 percent for all of 2016. That level of economic growth—which has been typical since the Great Recession—is sub-par compared to average annual economic growth in the period since World War II.

“People do have very high feelings of job security,” said McBride. But he added that for the past decade, most American workers have seen little or no increase in their wages beyond inflation.

“They’re not seeing enough money in the paycheck to the point where they’re comfortable spending,” said McBride. “We also see a greater hesitancy toward accumulating debt, relative to ten years ago, prior to the recession.”

McBride said Americans continue to deleverage—paying down debt when they can. But he said the savings rate has not increased appreciably, because most Americans don’t have excess income left over after paying their bills, to put away for a rainy day, to cover an emergency, or to save more for retirement.