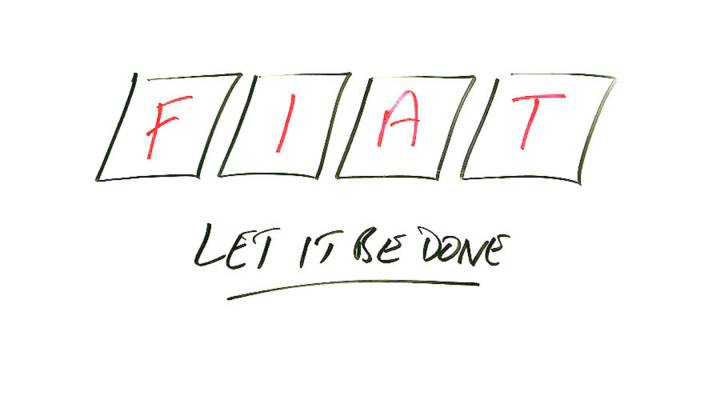 Fiat money: It has nothing to do with the car

Your dollar bill isn't worth the paper it's printed on. Why? Because it's a fiat currency. Sr. Producer Paddy Hirsch explains. Marketplace
Marketplace Whiteboard®

Fiat money: It has nothing to do with the car

Your dollar bill isn't worth the paper it's printed on. Why? Because it's a fiat currency. Sr. Producer Paddy Hirsch explains. Marketplace

Some banks, and even some countries, kept enough gold or silver in their vaults to make good on every promise written on every note they issued. Other countries started doing business that way, but soon began issuing more notes without reserving any additional precious metal. This was a risky endeavor: If everyone wanted their gold at the same time, the countries’ banks wouldn’t be able to pay them. When people began to realize this, the value of the notes fell sharply and the prices of goods rose. This is what’s called inflation.

The upside of having enough gold in one’s vaults to redeem every note is that everyone has confidence in the value of the money — it’s as good as gold. The downside is that raising more money is hard to do: one needs to find more gold to issue more notes, and the more one needs the gold, the more expensive it becomes.

When a currency becomes more expensive, a couple of things happen. First, the price of goods falls. When this happens, people who have gold tend to hoard it, so the currency becomes even more expensive, and that drives down the price of goods further still. This is what’s called deflation. Deflation is great at first: Cars are cheaper! Toys are cheaper! Food is cheaper! But pretty soon the scorpion of deflation shows the sting in its tail. Investors become reluctant to invest in anything that is losing value day after day, so they stop putting their money into companies and they begin selling their shares. This is what economists call a deflationary spiral.

Investors sell some of their shares and buy something presumed to be a safe haven, like gold or treasury bonds. If enough investors sell, and there aren’t many buyers, the price of shares falls. Other investors worry their shares will be worth less the next day, so they sell their holdings too. Pretty soon, everyone’s selling: No one wants to buy something that in two weeks will be worth less than the amount they paid for it. In this situation, investors are only interested in safe havens. They’re scared about what will happen to their money if they buy shares or make loans, so they do neither. Without investment, companies stop growing. They cut back, lay people off and stop buying from other companies. Before long, the entire economy is in danger of being plunged into a depression.

From the moment the first currency was created, governments have battled the twin terrors of inflation and deflation by issuing what’s called fiat currency. This means banknotes are worth a certain amount by government order, or fiat. In other words, it’s the government saying, “This note is worth $20 for no reason other than because we say it is.” Fiat currencies have been around for centuries, but it wasn’t until the U.S. government decided to make the dollar a fiat currency in 1972 that almost the entire world decided to adopt a similar system.

But inflation isn’t all bad. In fact, governments quite like inflation — in moderation. Inflation may devalue existing currencies a little bit, but that can be offset by the fact that there’s a lot more money coming into the system: money to spend, or invest, or build, or even hire more staff. So, in moderation, inflation can help keep people employed. Inflation, then, is part of our financial world, a necessary evil that most modern governments believe they are much better equipped to tackle using fiat currency.