Working in the dark, in the aftermath of Moore’s tornado

Working in the dark, in the aftermath of Moore’s tornado

The tornado that hit Moore, Okla., was 1.3 miles wide, the National Weather Service said this afternoon. It’s officially been classified as EF-5 — that is, the strongest of possible tornadoes with winds at least 200 miles an hour.

Since the twister left town, hundreds of rescue and emergency crews have descended on the town. For others who live nearby, the best thing they could do is go to work.

“It’s better than just me sitting at home watching TV all day,” say Lori Ohgi*, who works at the Locke Supply Company. “But it’s really, really, really bad…When I came work this morning — I could hardly see through the tears, number one. But you drive for a whole mile down the highway, and when you look to the left or the right as far as you can see, it’s absolutely flattened. Completely flattened. All those poor people.”

Travel was difficult when she came in, she said, due to all of the help surrounding the town.

“The highway is going about five miles an hour, and they’ve got the military and just helicopters, crews, emergency vehicles — just everything going on.”

At work, there’s paper receipts instead of the usual printouts. Conditions could be better, but they’re going to work through them.

“There’s no power, there’s no water,” she said. “But we have generators. We’ve had no customers today but [at] the company, this is what we do.”

“I’ve lived here for seven years and this is the third time since I’ve lived here that a tornado has come as close as a quarter-mile from me. And it’s scary, it’s really scary. It’s a beautiful, beautiful state. It’s the best people. I love it, but those tornadoes are scary. And it looks like a warzone. It’s the worst thing I’ve seen in my life.”

*Correction: An earlier version of this story misspelled Lori Ohgi’s name. The text has been corrected. 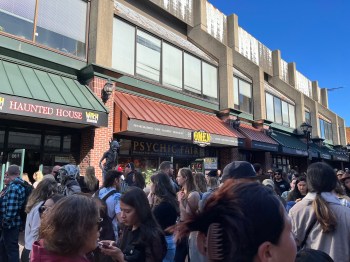