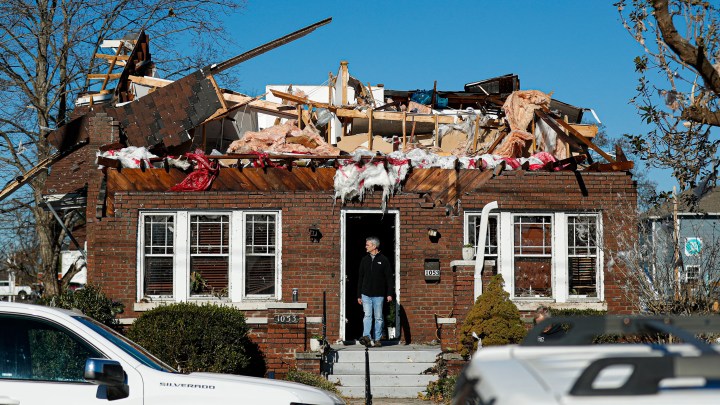 COPY
A homeowner reacts to tornado damage on Dec. 12 in Bowling Green, Kentucky. “We want to make sure that people have the ability to live and rebuild,” said Adrienne Bush, executive director of the Homeless and Housing Coalition of Kentucky. Gunnar Word/AFP via Getty Images

A homeowner reacts to tornado damage on Dec. 12 in Bowling Green, Kentucky. “We want to make sure that people have the ability to live and rebuild,” said Adrienne Bush, executive director of the Homeless and Housing Coalition of Kentucky. Gunnar Word/AFP via Getty Images
Listen Now

The devastating tornadoes that tore through Kentucky on Friday night claimed at least 74 lives and more than a thousand homes. Displaced people are streaming into temporary shelters.

“Some of them lost everything,” said Todd Hayden, a Graves County commissioner and shelter coordinator near Mayfield, Kentucky — one of the hardest-hit towns. “There’s hardly anything that is worth moving back into. Everything’s going to be demolished.”

That rebuilding will need to happen on top of housing issues the state already faces. According to the National Low-Income Housing Coalition, 30% of rental households in Kentucky are living at or below the poverty level, and 62% spend more than half their income on housing and utilities.

Adrienne Bush, executive director of the Homeless & Housing Coalition of Kentucky, spoke with Marketplace’s Amy Scott about the short- and long-term recovery ahead. The following is an edited transcript of their conversation.

Amy Scott: When you first heard about the damage from these tornadoes this weekend, what were your thoughts? And what are your priorities as a housing agency going forward?

Adrienne Bush: So, my immediate thought was just, “How do we get people sheltered? How do we meet that immediate need?” And then, “What does the long term look like?”

Scott: We’ve learned that a lot of people are being housed in very small shelters, you know, maybe churches, hotel rooms. What do you see as the longer-term strategy for getting people into more stable housing for the coming winter?

Bush: Sure. So, I mean, the shelter piece is critical right now, especially since, you know, we’re in winter now. But medium-term and long-term, we know that we have to build new homes. [We need to] preserve the ones that we can preserve, but we really need to do that and center it around people who are extremely low-income. Pre-pandemic, pre-tornado, we were already short about 78,000 affordable homes here. And so, we know that there is going to be a lot of building, but there also needs to be an investment in making homes affordable to people so that they can continue to rebuild and stay in these communities.

Scott: How do you think this might change the conversation about affordable housing and Kentucky, given those longer-term needs?

Bush: You know, I am an optimist, and so I always am trying to figure out, “OK, how does this change the conversation?” If we knew we had an affordable housing crisis before all of this, and then, you know, with almost two years of the pandemic that has really, really highlighted the inequities in our housing markets, we know we can’t go back to the status quo. And so, I do think that we need to build, but we also need to make sure that we have the funding pieces in place through vouchers or whatever other policy tools we have at our disposal — we want to make sure that people have the ability to live and rebuild.

Scott: What do you need right now, you and the other groups that will be working to recover from this?

Bush: Well, I mean, the first one is just cash. The governor has set up of comprehensive Team Western Kentucky fund. I think the really hard thing here for human beings when a disaster like this happens is we want to step in, we want to gather all the things. Right now, with entire towns that have been flattened, there just isn’t storage space. We’re still very much in the assessment process. And as far as, you know, my organization, we’re just trying to make sure that the resources that we do have available, [are] getting to the people in need and just be[ing] there for both the short-term needs and in the long term. 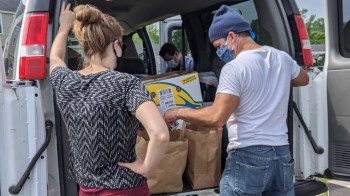