How much time do you spend traveling to work: Map

How much time do you spend traveling to work: Map

The average commute time is about 30 minutes. For the almost 8 percent of us that drive to work, it takes a whole hour. And for the fewer than 1 percent the Census calls mega-commuters — poor mega-commuters:

“One way to work is 90 minutes and 50 miles,” says New York trader Pete Sylvestri. “A long, long time.” Sylvestri is hustling to catch his train home — 55 miles away in Fairfield, Conn.

“It’s got a beach, it’s got great schools. A lot cheaper taxes than New York,” he says.

And Sylvestri is pretty much the type of person that makes these mega-commutes.

Alison Fields, with the Census Bureau, says they often work in fields like management and business.

“They also tend to have a higher salary than the average commuter, they tend to be male and they tend to be in the prime working age,” says Fields. “It’s still not anywhere near as prevalent as people might think,” she adds.

“Everybody’s different. Some of those difference add up to some fairly unusual behavior,” says James Moore, a transportation engineer at USC.

And as for the perception that we’re all wasting so much more time getting to work these days, Moore says nope.

“Typically, commuting lengths have been very, very stable in terms of time for the better part of a century,” says Moore.

We just go further in the same amount of time. 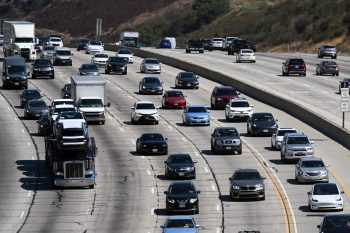