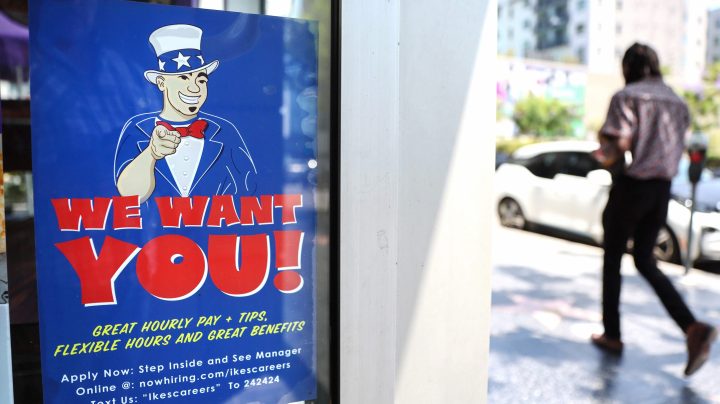 COPY
Despite talk about pay increases and a hot labor market, wages have remained stagnant for years when you account for inflation. Mario Tama/Getty Images

Despite talk about pay increases and a hot labor market, wages have remained stagnant for years when you account for inflation. Mario Tama/Getty Images
Listen Now

We’ve been hearing a whole lot in the last year or so about how tight this labor market is, how many people are switching jobs and getting big pay increases, how restaurants, stores and other kinds of businesses are raising wages to try to compete for workers.

But it turns out that in 2021, if you adjust for inflation, household income stayed pretty much the same as it was in 2020, according to new data from the Census Bureau.

And it continues a four-decades-long trend of wages not growing a whole lot.

You know that saying “a rising tide lifts all boats”?

“In the three decades after World War II, all boats were lifted by economic growth,” said Molly Kinder at the Brookings Institution. “When workers’ productivity went up, so did their wages. When companies did well, so did workers. Really across the board, low-wage workers, high-wage workers, middle-income workers, everyone was seeing their paychecks grow, and fairly evenly and proportionally to the economy and to their own productivity.”

Then, in the late 1970s and early 1980s, that changed. At least for workers at the bottom and in the middle, said Elise Gould at the Economic Policy Institute.

“Instead, we’ve seen wages at the top rise, we’ve seen a declining value of the minimum wage, we’ve seen measures implemented that make it harder for workers to form a union,” Gould said.

Meanwhile, globalization and automation of the labor market have also contributed to decades of slow wage growth.

And that was before the pandemic.

“But really the biggest problem in 2021, and even more so in 2022, is that fairly good wage increases have been offset by high inflation,” said Harry Holzer, a public policy professor at Georgetown University.

People in certain industries, like retail and hospitality, have received raises in the last year, he said.

Still, given what’s happened in the last 2½ years — a global pandemic recession, 22 million people losing their jobs — “you would have thought these two years of data should have shown unprecedented calamity,” said William Spriggs, an economics professor at Howard University.

So, Spriggs said, the fact that household income held steady through all of that is actually an achievement.