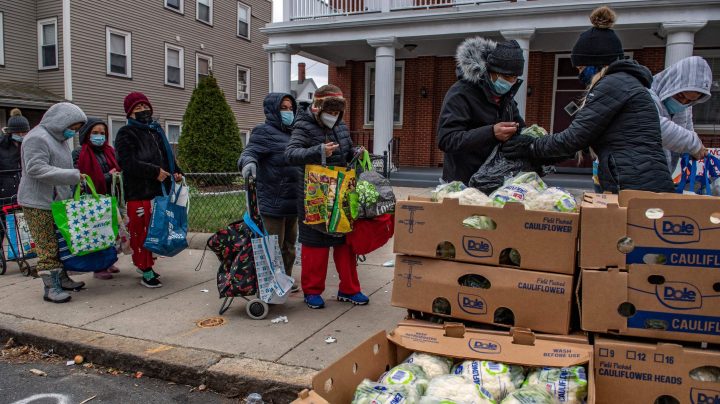 COPY
A volunteer hands out lettuce at a food pantry in December 2021. Last year, the supplemental poverty rate fell to 7.8%, according to the U.S. Census Bureau. Joseph Prezioso/AFP via Getty Images

A volunteer hands out lettuce at a food pantry in December 2021. Last year, the supplemental poverty rate fell to 7.8%, according to the U.S. Census Bureau. Joseph Prezioso/AFP via Getty Images
Listen Now

An important set of economic numbers were reported Tuesday by the U.S. Census Bureau, that tell us about poverty. The official poverty rate was 11.6% in 2021, basically unchanged from 2020.

It’s a different story, though, for the supplemental poverty rate.

The supplemental poverty rate is generally the preferred measurement because it factors in things like geographic differences in the cost of living, as well as safety-net programs like food stamps.

By that measure, poverty fell to 7.8% — the lowest number since the bureau started tracking the supplemental poverty rate in 2009. And share of children living in poverty fell by almost half last year, which is a remarkable success story.

So why were 4 million fewer people living in poverty last year compared to 2020?

First, the labor market was good. But maybe more importantly:

“We’ve spent the past year seeing a lot of government programs and cash assistance coming into families,” said José Pacas, an economist with Kids First Chicago.

Big tax credits for low-income households and those last stimulus payments were the biggest factors. An expanded child tax credit gave families more than $3,000 per kid.

“The child poverty reductions were stunning,” said Indi Dutta-Gupta, president of the Center for Law and Social Policy. “We had very well designed policies to send child poverty to levels we’ve never seen in this country.”

Black children were the biggest beneficiaries, seeing their poverty rate cut from 17% to single digits. The poverty rate among Hispanic children also dropped.

It’s important to remember here a lot of that expanded safety net has been rolled back.

“What the numbers today really tell us is that poverty isn’t inevitable,” said Sarah Halpern-Meekin, who researches poverty at the University of Wisconsin-Madison. “It is in part a product of our policy choices.”

Unless Congress acts to restore some safety-net programs, it’s unlikely the poverty numbers we saw in 2021 will last, especially as inflation pushes the cost of living higher and higher.