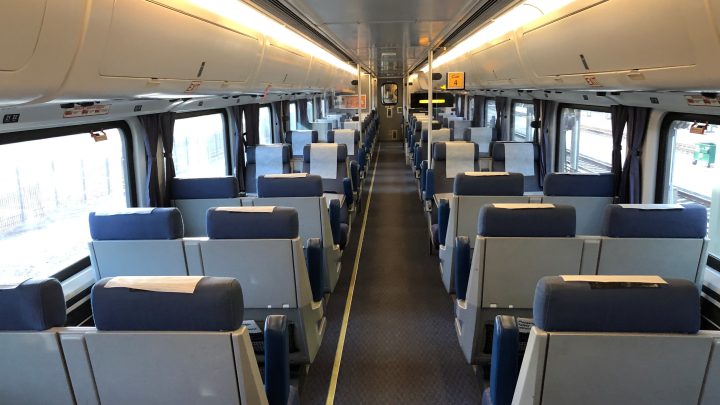 On a recent Monday, in the Moynihan Train Hall across from Penn Station in Manhattan, things looked a lot like you’d expect them to these days — pretty empty.

A small stream of masked passengers were boarding the Amtrak Empire Line to begin the long trek upstate. Even though it was a weekday after work, suitcases outnumbered briefcases.

It’s hard to imagine, but the Empire Line used to be a rolling party. There were even baby showers on the train.

“We had two commuters that were due to give birth a month apart. One was having a boy, one was having a girl,” said Maria Santana, an operations manager at a New York City financial-services firm. “So of course we had the pink martinis and the blue martinis.”

Santana and her husband, Dairo Chamorro, have been commuting from the Hudson Valley to Manhattan since 2006.

They’re the unofficial mayors of the Empire Regulars, or the train gang, as they sometimes call themselves.

There are 100 people in the official Empire Regulars Google Group. It would probably take the full commute to Albany to list everyone.

Before people started working in their dining rooms, most nights you could see 15 to 20 of them squeezed into the cafe car around those weirdly undersized Amtrak tables. They shared sake and beer and Penn Station sushi.

“At the end of a rough day, it was really nice,” Santana said. “It helped get you to the right frame of mind to when you got to the end, you could deal with everything else.”

That Amtrak decompression bubble has burst.

And that worries Setha Low, an anthropology professor at The Graduate Center, City University of New York.

She said if a huge chunk of the population ends up working remotely, we could lose a unique form of what sociologists call the “third place” — those social environments free of the baggage of home and work.

“It’s a limbo, between home and work, in which other kinds of relations and attachments were located,” Low said. “And that when it’s gone, there’s definitely a sense of loss.”

Third places like bars and cafes and bowling leagues will likely resurface after the pandemic subsides. But commuter groups face a more uncertain future, and there’s no ready replacement.

“The commuter car … you’re somewhat anonymous,” Low said. “They don’t necessarily know what your house looks like or how big your house is.”

Most of us aren’t going to mourn our lost commute. On average, Americans spent nearly an hour a day getting to and from work in 2019, according to data from the Census Bureau.

Angela Cole won’t miss getting up at 4:30 a.m. to catch the Empire Line into New York City to catch the 6:40 train.

Cole, who’s in her 50s, is willing to hit the snooze button on her commute and her hefty Amtrak bill for good. The health care company she works for is fine with her being remote permanently.

Cole said she doesn’t need the train to be part of the train gang. After 11 years of birthdays and anniversaries and holiday parties and even funerals, they’re family now. She sees many of them off the train all the time.

But she does worry about making new friendships. The train made that easy.

“I think it’s making all of us, certainly me, work harder at the new connections,” Cole said. “Because it’s not as organic now.”

Beyond the camaraderie, the party car was also a traveling LinkedIn.

It led to new gigs for a sound engineer, a screenwriter found a new writing partner and there were recommendations for electricians and pet sitters and orthopedic surgeons.

And it’s not just the train gang. Sometimes companies can also benefit from their employees’ long commutes.

Bryan Yeh used to take the ferry every day from Oakland across the San Francisco Bay. Some of the engineers he supervised at a biotech firm were on the ferry too.

“At the workplace, it was a different environment because you have a lot of people peeking into my office seeing if they were in trouble or not,” Yeh said.

His office had glass walls that made it hard for anyone to forget he was the boss.

But on the ferry, over a couple of beers, everything felt a little more equal. Which may be why a younger engineer was comfortable enough to ask for a $400,000 robot that helped break down natural gas into valuable industrial chemicals.

“On this ride we were able to discuss a lot of things probably in a more open way that we wouldn’t have necessarily done,” Yeh said.

He approved the robot, and it saved the company loads of time and money. He doesn’t think the idea would have crossed his desk on land.

Yeh’s CEO of a different company now and is allowing most of his employees to work from home permanently after the pandemic ends. No one is being forced to go back to the office.

The office? Remember that? It’s where we used to go to complain about our commutes.