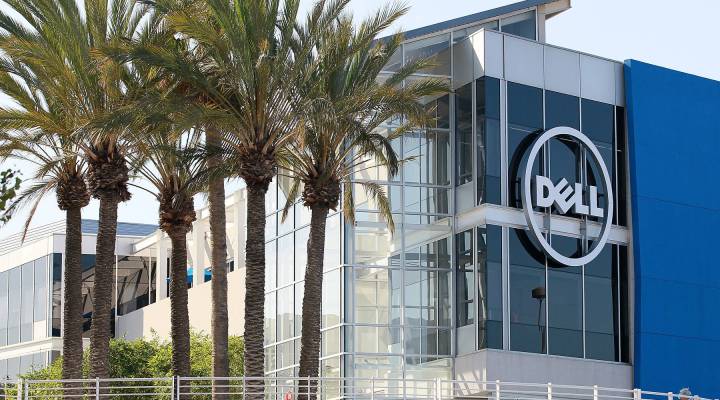 COPY
Computer maker Dell plans to de-list from the stock market in a $24 billion private equity buyout. It's the biggest such deal in five years. Justin Sullivan/Getty Images

Computer maker Dell plans to de-list from the stock market in a $24 billion private equity buyout. It's the biggest such deal in five years. Justin Sullivan/Getty Images
Listen Now

If you run a company, the great thing about going public is that you bring in other people’s money. The bad thing? You have to answer to all those people. No easy task even when times are good.

But times aren’t good for Dell. And the once-dominant personal computer maker today announced a $24 billion deal to buy out its shareholders and go private.

Brad McCarty, the director of business development at The Next Web, isn’t surprised at the move. In the last five years, Dell’s stock price has tumbled.

“People in the market only know them as ‘Dude, you’re getting a Dell’ guy,” McCarty says, referring to an advertising campaign back when Dell was the biggest computer maker in the world. But now consumers are trading their PCs in for tablets and smartphones, and the laptop market isn’t what it used to be.

But the potential new owners of Dell know there’s more to the company than PCs, says analyst Adrian O’Connell of Gartner Research. Dell is also a big player in business services: Providing servers and computers to companies and maintaining them.

“We tend to look at Dell as two companies at the moment, or, rather, we think in terms of old Dell and new Dell,” he says.

And that new Dell is well-positioned in the growing field of business services, says tech consultant Tim Bajarin, president of business technology consulting firm Creative Strategies. He says computer systems are “the backbone of running any corporation. We’ve moved into a data age.”

Bajarin points out that a lot of old guard computer-makers have flocked to the sector, including IBM and Hewlett-Packard.

Of course, changing a company’s focus takes time, Bajarin says. And being public means posting earnings and answering to shareholders every three months.

“By going private, it takes the quarterly monkey off their back of the shareholders demanding a quarter-by-quarter profit,” he says.

Bajarin says Dell might sell off its PC business. IBM sold its personal computer business to Lenovo and its stock price has more than doubled since then.