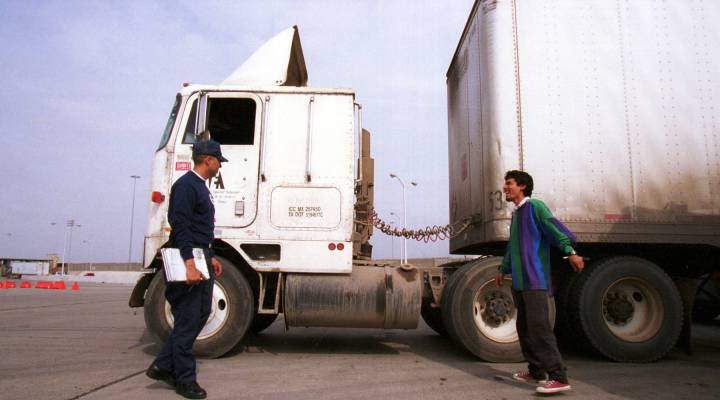 COPY
A U.S. Department of Transportation border inspector, explains his evaluation of a Mexican driver's truck on February 14, 2001 in Laredo, TX. Joe Raedle/Newsmakers

Every day, more than a billion dollars worth of goods moves across the border between Mexico and the United States. Trade between the two countries quintupled in the last two decades.

The World Trade bridge in Laredo, Texas is the most important commercial crossing along the southern border. About one third of all goods traded between the U.S. and Mexico travel through this port of entry. That equals about 5,000 trucks per day moving everything from cornflakes, to weed eaters, to Volkswagen bugs.

“World Trade Bridge was actually opened in April 2000,” says Gene Garza, who is in charge field operations in south Texas for U.S. Customs and Border Protection, “prior to that there was no bridge here, there was nothing out here this was just farm land.”

The bridge is a testament to the post-NAFTA boom when most tariffs between the United States and Mexico were eliminated. Since NAFTA the number of trucks crossing through Laredo has tripled. But even before this bridge celebrated its 10th birthday, traffic had already outgrown capacity.

Last year border authorities nearly doubled the number of lanes to 15. Still wait times can be inconsistent, which is a problem for manufacturers.

A five-hour-plus wait time is worse case scenario. On good days drivers may wait just one hour. If they are accredited under a Customs and Border Protection trusted traveler program their wait could be less than an hour.

The main hold up at the border is security. After the terrorist attacks of September 11, 2001 the inspection process at the border intensified. Every vehicle that crosses through U.S. borders is subject to a thorough screening. That could be an X-ray of both the truck and trailer or a manual inspection where the entire contents of a trailer is unloaded and checked.

“We have to facilitate the commercial traffic coming in but we also have to make sure that our borders are secure,” Garza says.

Infrastructure at the border also affects wait times. The biggest obstacle to updating the current ports of entry and building new ones is insufficient federal funding. It’s especially tough now when the country is recovering from an economic recession and Congress has failed to approve the a new budget.

Chris Wilson, who researches binational trade for the Woodrow Wilson Center in Washington D.C., says “Customs and Border Protection has identified a $6 billion deficit between where we are now and where we need to be to keep up with all the people and goods that are flowing across the border everyday.”

There has been some progress. There’s a new commercial port of entry in Arizona and another under construction in west Texas. Other ports have added additional lanes and trusted traveler programs have helped speed up inspection times. But it’s not enough. In the past two years binational trade has grown by a record 23 percent. Without the infrastructure to support that amount of trade both countries lose out.

“It cuts into the competitiveness of manufacturing in North America,” Wilson says. “It means that we have less jobs, less trade, less exports and those are things that are really important right now to our economy.”

In an effort to speed things along, some binational business leaders have begun to invest in infrastructure themselves.

“The truth of the matter is we cannot afford to wait for the federal government to allocate federal dollars for these important projects,” says Ruben Barrales, president of the San Diego Regional Chamber of Commerce.

One example of such a project is a privately funded non-commercial border crossing outside San Diego that’s currently under construction. Once completed it will link travelers directly to the Tijuana airport. It’s success may help determine the future of other privately funded commercial projects currently in the works.