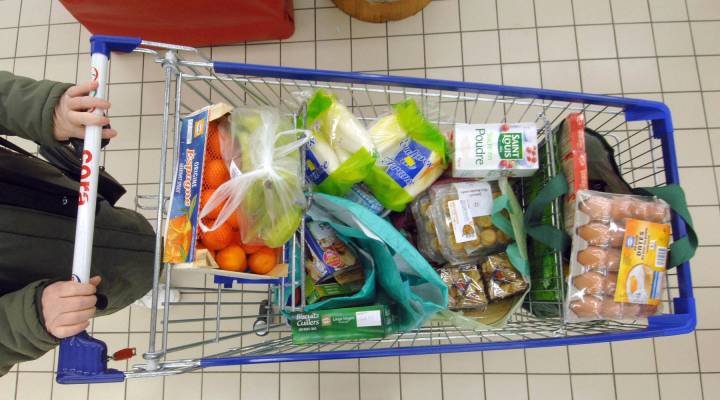 COPY
It is possible to eat healthy, filling food for a relatively small amount of money. A recipe taster from Cooking Light Magazine tells us how to do it. Mychele Daniau/AFP/Getty Images
Food and Drink

It is possible to eat healthy, filling food for a relatively small amount of money. A recipe taster from Cooking Light Magazine tells us how to do it. Mychele Daniau/AFP/Getty Images
Listen Now

The problem of tracking down healthy, filling food for a relatively small amount of money is a perennial one. If you stick to the basics you can probably keep your costs down. But anyone who’s ever tried that knows that you often end up sacrificing two key ingredients: variety and taste. No one wants to eat beats and rice, or plain old pasta, every night of the week.

Robin Bashinsky, a recipe tester and developer from Cooking Light Magazine, took on the challenge of preparing five varied and tasty meals for a hungry family of four in Birmingham, Ala. on a budget of just $50.

A quick rundown of the recipes he ended up cooking:

Some of this may sound like it should get a little pricey, but the trick is to buy the right ingredients.

First off, the meat. The two Bashinsky chose for his recipes were cuts that are known for being a bit cheaper: chicken thighs and pork shoulder. Chicken thighs are getting more popular, but they are usually still the cheapest part of the bird to buy. And pork shoulder may seem expensive at face value — but that’s because it is sold in 6 lbs. chunks. To feed your family for one night — instead of a whole week — you just need to buy less of the meat.

“You basically just have to have the guts to go up to the butcher and say, ‘Hey I know that this is going to look ridiculous, but could you just cut a pound off of that,’ and usually they’re very kind and don’t mind,” he says.

The same rules apply elsewhere: you might feel a little silly, but buying smaller portions is often way more affordable. Even more expensive stores like Whole Foods can have deals waiting for you in the bulk bins of spices, dry rice, and beans.

Other good bets for cheap food finds? Ethnic markets. “If they stock it there, it’s cheaper than wherever you’re normally buying it, I can promise you that,” he says.

And while Bashinsky’s tight $50 spending limit might not be possible in every city in America, the same rules apply no matter where you live. If you live in San Francisco, Chicago or New York, you are probably already used to paying a bit more for food, so “don’t get too disappointed when it costs you $70 to do this instead of $50,” Bashinsky says.