Kai Ryssdal: The teachers’ strike in Chicago entered its second week this morning. A tentative deal failed to attract enough union support over the weekend. This afternoon, Mayor Rahm Emanuel wasn’t able to convince a state court to declare the strike illegal and force teachers back to the classroom.

There’s another teachers’ strike — one that’s getting a lot less attention in the well-to-do north Chicago suburb of Lake Forest. Today, the district took the unusual step of holding classes anyway. From the education desk at WYPR, Marketplace’s Amy Scott reports.

Amy Scott: Lake Forest High School teachers have been on strike over their pay since last Wednesday, but today school was back in session. Officials promised a “full day of instructional programming,” provided by substitute teachers and volunteers who crossed the picket line. Attendance mandatory.

Chuck Gress: From what we’re hearing from the kids, there were videos being shown.

Karina Richter: And the highlight of the day, apparently, is when they had a police dog come in, because the dog was so cute.

That’s math teacher Chuck Gress with Karina Richter, the parent of a student who graduated last year. They spoke to me from the picket line, as a crowd waved signs outside the school. Some have dubbed Lake Forest High a “scab school,” but that’s not how Gress — a teacher for 20 years — sees it.

Gress: The people in that building right now, the administrators, are among my friends. It has got to be one of the worst days ever at Lake Forest High School for those administrators, and I know that when this whole thing is settled, we’re going to have to pick up the pieces.

School administrators did not return calls asking for comment. Michael Griffith is with the nonpartisan Education Commission of the States. He says keeping school open means the district doesn’t have to make up the days later or risk losing state funding. But teachers lose the chance to get paid for those make-up days.

Michael Griffith: They can then use this as leverage against the teachers, because now every day that the teachers miss is a potential lost day in their pay.

A few parents I heard from were happy the school was open. They didn’t have to make other arrangements. But eventually, Griffith says, they’ll want their kids learning again. 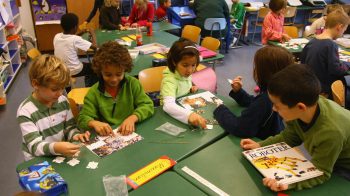 Public school teachers are spending their own money on school supplies