Happiness is relative in Europe these days: Investors are cheering news that the euro area’s top economies did not turn in the abysmal results many had expected.  Instead, things are just “garden-variety” bad: France’s economy did not shrink in the second-quarter. Quite on the contrary, France posted a growth rate of zero. German GDP grew at the brisk pace of 0.3 percent.

Some good news from the Commerce Department this morning: Retail sales are up. That was the first uptick in four months as consumers spent their money on everything from cars to electronics.

The nation’s largest home improvement chain, Home Depot,  says its profit was up 12 percent last quarter, thanks to cost cutting and a jump in U.S. sales. That jump means more people are sprucing up their homes.

Shares of Groupon continue this morning to be kind of a like a traffic accident you can’t look away from. Groupon‘s share price is down more than 20 percent so far today, more than 60 percent from its IPO price back in November.

3D printing — perhaps you’ve heard about it. The increasingly accessible devices that allow people and businesses to “print” physical objects.  A couple notable 3D printing advances have surfaced in recent days.  An engineer at USC has demonstrated how you could use it to make a house.  One hitch is that you’d need a 3D printer bigger than a house. 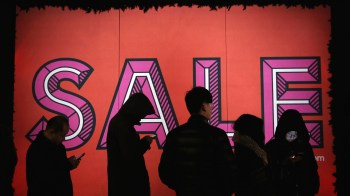