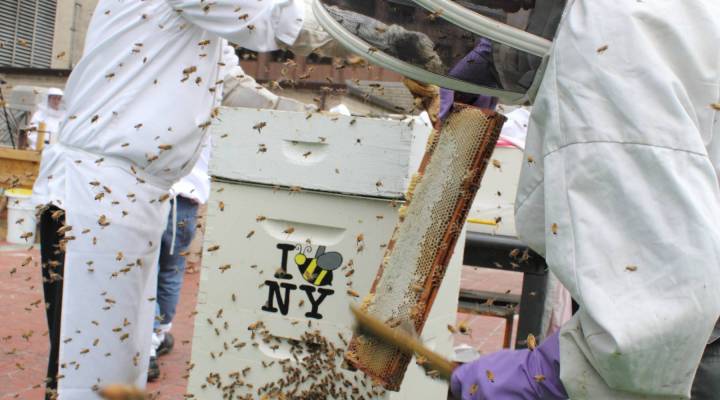 Bees check in at the Waldorf

COPY
Harvesting honey. The Waldorf Astoria Hotel in New York is raising 300,000 bees on the roof. It's all part of a plan to get younger guests buzzing. Photo courtesy of the Waldorf Astoria

Bees check in at the Waldorf

Harvesting honey. The Waldorf Astoria Hotel in New York is raising 300,000 bees on the roof. It's all part of a plan to get younger guests buzzing. Photo courtesy of the Waldorf Astoria
Listen Now

Kai Ryssdal: Leave it to Americans to take a good idea just that additional step too far. Not too long ago hotels in Paris started keeping bees on their roofs. Kind of a farm-to-table, local food feature for the hotel’s restaurant. Now? Here? It’s a marketing tool.

Marketplace’s Stacey Vanek Smith scaled the heights of a landmark Manhattan hotel to get the story.

Stacey Vanek Smith:I’m standing roof of the Waldorf Astoria Hotel in Midtown Manhattan, holding my microphone up to the entrance of one of six wooden beehives. There are about 300,000 bees in these hives, which I’m trying not to think about.

David Garcelon is the executive chef at the Waldorf. It was his idea to put the bees here and he has been incorporating the honey into the hotel’s food.

David Garcelon: We get a great ingredient from it and it’s a great story for our guests.

The Waldorf expects to harvest about 800 pounds of honey a year. Its restaurants use about 1,000 pounds a year.

Garcelon: I’ll just put a little bit on this spoon.

Garcelon: You get a bit of herbal, kind of minty? We think that’s from, there are a lot of linden trees in New York in the spring.

Garceleon has started adding the honey to salad dressing, roast chicken, crème brulee. It’s not all milk and honey though. The bees can swarm out of their hives. They sometimes get into the rooms and people have been stung. But the Waldorf sees these bees as a way to make the grand dame of New York hotels appeal to younger luxury travelers.

Matt Zolbe: We want to reintroduce the Waldorf to the next generation.

Matt Zolbe is the director of sales and marketing at the Waldorf. He says the bees appeal to health-conscious, environmentally-conscious guests who want an experience — not just a swanky room.

Zolbe: People want to be someplace where something happens, that something is extraordinary. Otherwise, we are a commodity or a widget.

Zolbe says the Waldorf plans to offer hive tours and tastings and sell jars of the honey. It’s launched a social media campaign around the bees and plans to let Facebook fans vote on names for the hives.

Zolbe: For example, we would have Empire State of Hive. Maybe Alicia Bees would be the queen bee in that hive.

Stacy Small is the president of Elite Travel International. She says hotels are competing like mad for a shrinking pool of high-end travelers. And these days, those travelers want authentic. Be it home-grown honey or other rustic, behind-the-scenes experiences.

Stacy Small: I was at the Metropole in Hanoi recently, and they had us meet with the executive chef and then going by taxi to the local market with her and watching her bargain and then come back and getting a cooking lesson with her.

Small says hotels are trying to create a contemporary Kodak moment, so guests post pictures of their hive tour or lobster dive on Facebook or Twitter.

Small: One photo that they take of something really cool going on at a hotel could lead to 10 more of their friends calling me to book that hotel.

Oh, the value of buzz.

On the roof of the Waldorf Astoria, I’m Stacey Vanek Smith for Marketplace.