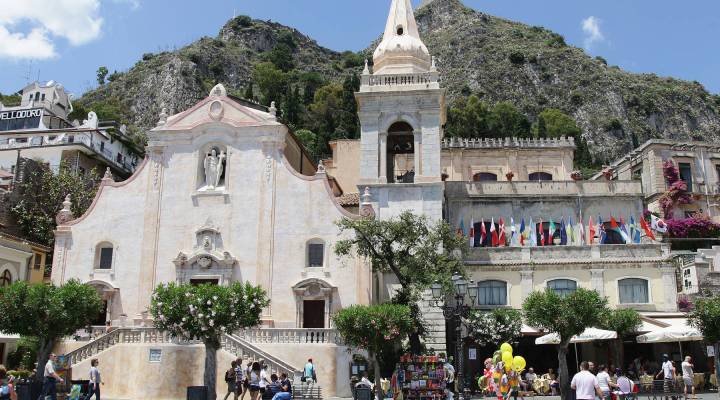 What’s up, Europe? Small talk turns to finance in Italy

COPY
A general view of the church of San Giuseppe in Taormina, Italy on the island of Sicily. Vittorio Zunino Celotto/Getty Images
European Debt Crisis

What’s up, Europe? Small talk turns to finance in Italy

A general view of the church of San Giuseppe in Taormina, Italy on the island of Sicily. Vittorio Zunino Celotto/Getty Images
Listen Now

Tess Vigeland: The news out of Europe — well you already know it isn’t good, right? The credit rating agency Moody’s changed it’s outlook for Germany to negative yesterday. Yes, Germany — the EU’s strongest economy and bankroller of everybody else’s debt. So you can bet it’s even worse in Italy. A number of Southern Italian cities, including the entire province of Sicily, are on the verge of bankruptcy.

And so to Rome today — as we ask:  What’s up, Europe? And to Francesco Semprini, reporter for La Stampa. Good to have you with us.

Francesco Semprini: Thank you, thank you for having me.

Vigeland: How much are these economic woes on the minds of average Italians? The country is a bit bifurcated in how bad things are, so especially in Rome and the North where it might not be so bad, are people not really thinking about it as much?

Vigeland: You know, back in 2008 when the U.S. was plunged into an economic crisis even at dinner parties people were talking about mortgage backed securities and credit default swaps. Is the language changing there for, you know, the water cooler conversation?

Vigeland: Reporter Francesco Semprini of La Stampa in Rome, thank you so much for your time.

Semprini: Thank you, my pleasure.