Jeff Horwich: Let’s face it: War is big business. And in Syria, a lot of that business is happening with Russia. Russia has said it will not make any new arms deals with Syria.

But from Moscow, Peter van Dyk reports for us that weapons will continue to flow.

Peter van Dyk: Thousands of people have died in the months of fighting in Syria, but despite the death toll, and international pressure, Russia continues to send weapons to the Assad regime.

Sergei Lavrov: We are implementing the contracts which we have to supply arms to Syria.

In a recent TV interview, Russian Foreign Minster Sergei Lavrov said the anti-aircraft systems Russia sells are of no use in Syria’s civil conflict.

Lavrov: Those armaments are entirely defensive.

And they are worth up to $1 billion a year. Russia lost valuable arms contracts when the government of Muammar Gaddafi fell in Libya. Then-President Dmitry Medvedev upset a lot of people when he held off vetoing the U.N. resolution that authorized airstrikes against Gaddafi.

Pavel Felgenhauer is a defense expert with the liberal Nezavisimaya Gazeta newspaper. He says current President Vladimir Putin has very close ties to the arms industry.

Pavel Felgenhauer: Putin, who was against the Libyan deal with the West, argued that the West betrayed us, they said one thing and did another, we lost a lot of money, and now we will not allow that to happen again.

Military analyst Ilya Kramnik says the contracts with Syria are worth even more than those with Libya. Not enough to save Assad on their own, though. Syria is a major, long-term partner, Kramnik says, but it’s not on the scale of India. He says military ties with Syria come second to Russia’s fears of radical Islam.

Felgenhauer: Most likely a lot of what the Syrians really need like munitions small arms, is going not direct from Russia through the government monopoly channel Rosoboronexport but through freelancers. And they can deliver actually in a week’s time after getting an order if they are paid in cash.

That sounds like a seller’s market. Good business for Russian arms traders. 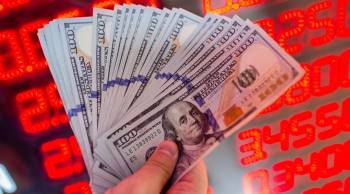 How strong is the U.S. dollar’s position as a reserve currency?