Russian ship with helicopters for Syria turns around

Russian ship with helicopters for Syria turns around

Jeff Horwich: The U.S. and Europe are focused on diplomacy and sanctions to stem violence in Syria — and perhaps force the current regime from power. One problem is Russia’s alleged supply of arms to the government there. But Western diplomats have discovered a vulnerability: every weapons-carrying ship has to carry insurance. And who sells the bulk of the world’s marine insurance? The EU, U.S. and Japan.

The BBC’s Steve Rosenberg is covering this new development from Moscow. Hello, Steve.

Horwich: So tell me just what happened yesterday with this Russian ship, the Alaed.

Horwich: And one critical point here is that that insurance company was based where?

Rosenberg: This was a U.K. based insurance company. And although the company itself, Standard Club, hasn’t confirmed that it was the British government that asked it to remove that cover. We have information that suggests that it was indeed British government officials which told the insurance company that according to U.K. information the ship was carrying munitions, and that breaks EU sanctions; and that the request was put in to remove insurance cover.

Horwich: How significant a tactic could it be in keeping helicopters and other arms from making their way to Syria?

Rosenberg: Well, I think it sends a very clear message to the Russian authorities that Britain, the United States and Europe are determined not to allow arms to filter through to Damascus. Now, the interesting question is: how important is Russian military aid to President al-Assad? And so, I think there is a feeling in the West that it’s important to cut off the supply of arms that may be coming from Russia to Syria.

Horwich: Steve Rosenberg of the BBC, thank you very much. 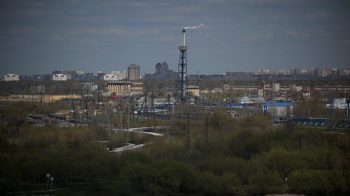