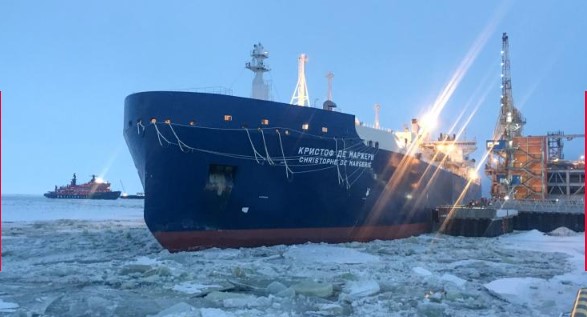 COPY
The ice-breaking Christophe de Margerie, carrying natural gas to China, was able to start its Arctic voyage earlier in the year because of thinning ice. Total

The ice-breaking Christophe de Margerie, carrying natural gas to China, was able to start its Arctic voyage earlier in the year because of thinning ice. Total
Listen Now

This week in China, a Russian tanker ship will deliver a cargo of natural gas after taking the Arctic route across the top of the world and completing its voyage at the earliest time of year ever.

This voyage is a test case for a Russian energy company that wants to ship natural gas to China throughout the summer months. Taking the Arctic route lops off more than 10 days from the traditional trip across the Mediterranean Sea, through the Suez Canal and around India.

“This route is not ice free at this time of year at all,” said Julienne Stroeve, Arctic climate scientist at the University of Manitoba and research scientist at the National Snow and Ice Data Center at the University of Colorado Boulder. “What I guess is more important, I suppose, for the ship is how thick that ice is. And it looks like the ice is less than the meter thick at the moment, which is quite thin.”

Arctic ice is thin because annual winter seasons for growing ice in the Arctic are getting shorter, given global warming, Stroeve said. According to NASA, the average surface temperature in the Arctic is nearly 4 degrees Celsius, or about 7 degrees Fahrenheit.

“If they encounter really severe ice, they can actually turn the ship around,” Malte Humpert, founder of The Arctic Institute think tank, said. “And the back of the ship is a lot more hardened. So they turn the ship around and they can ram through the more severe ice. And then once they’re through that, they turn around again and go normal direction forward, which is more efficient.”

The whole idea of the crossing is to exploit the result of climate change: a warmer Arctic. Some environmental groups argue oil and gas companies helped create a warmer planet in the first place and are now turning around and profiting from it.

Critics also fear Arctic energy production and transportation will pollute the air and water. Last week, a Russian power plant leaked about 20,000 tons of diesel into an Arctic waterway.

Still, the Russian government is investing $300 billion into the region.

“Vladimir Putin has put his own prestige on the line with Arctic development, as well as Russia’s economic future.”

“Vladimir Putin has put his own prestige on the line with Arctic development, as well as Russia’s economic future,” said Heather Conley, senior vice president for the Arctic, Europe and Eurasia at the Center for Strategic and International Studies. Conley said it’s not clear the investment will yield profits, given specialty ships and insurance are expensive, and the selling price of oil and gas is unpredictable.

Other countries are also betting on a warmer Arctic to gain access to minerals, commercial fishing and opportunities to build pipelines.

“China is investing more in infrastructure all along the Arctic routes,” Conley said. “You’re starting to see where Russia and China are working together now.”

The United States, Canada and Nordic states also have stated aspirations in the Arctic, which Conley describes as a new spot in the world for “great power competition.”

To be sure, it is becoming easier to cross the Arctic, given how quickly the ice is melting, said Donald Perovich, engineering professor at Dartmouth College’s Thayer School of Engineering. Perovich studies the geophysics of sea ice.

Sea ice reflects the sunlight back into space, so losing it is what Perovich calls a climate change “amplifier.”

Three decades ago, Perovich said, no one considered steaming a ship across the Arctic. “And 30 years from now, if trends continue, it’ll be straightforward.”

Maersk is sending a container ship through the Arctic. Here’s why.