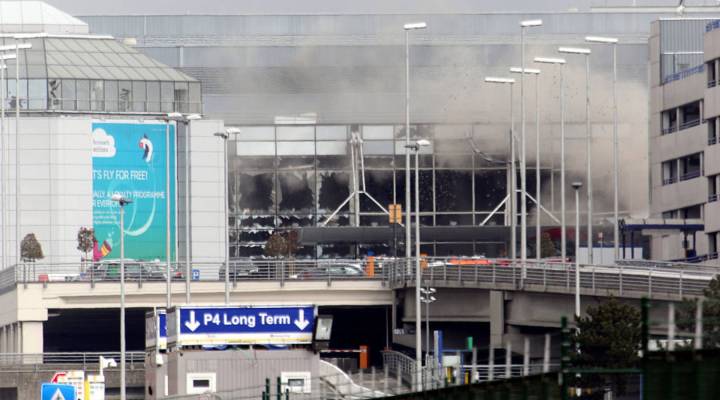 COPY
A plume of smoke rises over Brussels airport after the controlled explosion of a third device in Zaventem Bruxelles International Airport after a terrorist attack on March 22, 2016 in Brussels, Belgium.  Sylvain Lefevre/Getty Images

A plume of smoke rises over Brussels airport after the controlled explosion of a third device in Zaventem Bruxelles International Airport after a terrorist attack on March 22, 2016 in Brussels, Belgium.  Sylvain Lefevre/Getty Images
Listen Now

ISIS claimed responsibility for the deadly attacks at a subway station and international airport in Brussels on Tuesday. Authorities in many countries responded with increased security around metros and airports as a precaution. Those who study terror tactics say these kinds of operations have become less expensive to pull off.

For all the destruction they cause, bombs are pretty cheap to make, often under a thousand dollars, said Bruce Hoffman, director of Georgetown University’s Center for Security Studies and the author of the book, “Anonymous Soldiers.”

“Depressingly,” he said, “it costs very little money to stage a successful terrorist attack these days.”

Some of the money for those attacks come via ISIS income streams including kidnapping, extortion, selling antiquities and taxing the areas it occupies.

But not all attacks are fully funded by the main group. Terrorist cells also tap into social media, sometimes even crowdfunding operations, according to Elizabeth Rosenberg, a senior fellow at the Center for a New American Security.

“It’s low level, and it’s more anonymous,” said Rosenberg, “So it’s really challenging for regulatory authorities and for law enforcement officials to get a handle on this.” That’s especially true for ISIS, given its strong online presence.

Malcolm Nance is executive director of the Terror Asymmetrics Project on Strategy, Tactics & Radical Ideology, and author the book, “Defeating ISIS.” He said local support is also becoming more important, as opposed to terrorists looking to the central organization for financing.

“Now this is a hybrid sort of terrorism,” said Nance, “where the operator himself may self-fund, where the donations may come from someone local — where the money that he carries with him is strictly cash.”

European nationals can go to Syria or Iraq, then come back and use their existing networks of support — sleeping on a friend’s couch rather than spending money on a hotel room under a false name.

According to Nance, this type of operative “may sell drugs, sell weapons, steal, and do anything to support his operation, in such a way that he doesn’t come up on the law enforcement radar. And we’re seeing that with some of the petty criminals who are operating inside of Europe.”

Nance said that kind of petty crime is increasingly being used to finance terrorism.