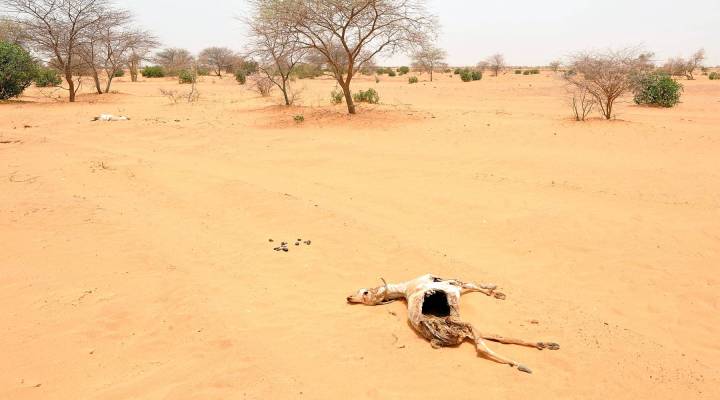 COPY
Would a drought by another name not seem so severe? ABDELHAK SENNA/AFP/GettyImages
Mid-day Update

Would a drought by another name not seem so severe? ABDELHAK SENNA/AFP/GettyImages
Listen Now

Five big cable TV companies are pooling resources so that customers can get wireless internet connections when they are on-the-go. TimeWarner, Comcast, Cox, Cablevision and Bright House Networks are cobbling together 50,000 Wi-Fi hot spots, mainly in one of the country’s most populous sections, a swatch of territory surrounding Philadelphia and New York. This will help them compete with internet and TV companies such as Verizon that also have wireless networks.

Oil, which has generally been getting cheaper in the last two months, ticked upward slightly on European markets this morning. Major powers are meeting in Baghdad to discuss Iran’s nuclear program.

Well the organization for economic cooperation and development said this morning that European economies may not see any economic growth this year.

The OECD called on the European Central Bank to do more to stem the debt crisis, which it calledthe biggest risk to the world economy.

To the U.K. where the Environment Agency wants to get rid of the term “drought.” Officials say drought is too blunt of a word and often conjures up images of dry river beds and cracked soil. Not all droughts cause that kind of thing. One new term they’re considering? “Environmental stress due to rainfall deficit.”

And finally, to a conflict between traditionalists and the avant-gard in Naples, Italy. Enzo Coccia has introduced what he calls ultra-pizzas, with toppings like baccala, or salt cod, to you non-Neapolitans. There’s also one with truffle oil that costs a fortune. Thing is, his rivals see pizza as a simple thing, born as a food for the poor. The Neapolitan Association of Pizza Makers says it’s not OK with this and the Guardian newspaper has one third-generation pizza guy saying “I’ve seen cream being used. It doesn’t get any worse than that.”