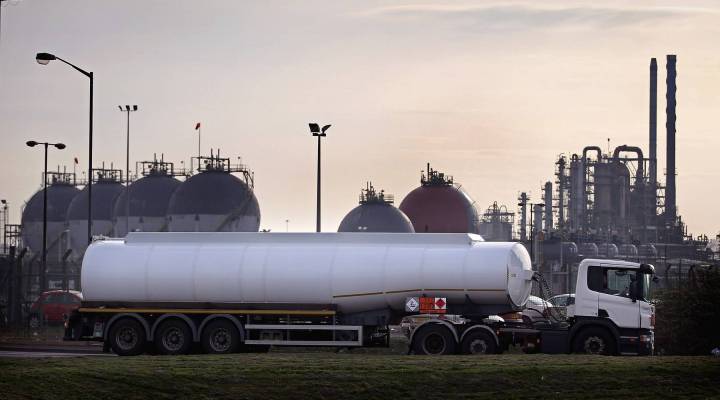 Tanker drivers depart Grangemouth oil refinery on March 29, 2012 in Grangemouth, Scotland. An oil rig off the coast of Scotland has been leaking oil into the North Sea for five days. Jeff J Mitchell/Getty Images

Stacey Vanek Smith: An oil rig off the coast of Scotland has been leaking oil into the North Sea for five days. The rig is owned by French gas company Total, and is costing millions a day in lost revenue and attempted repairs.

Smith: So Colin, put this leak in context for us if you will — how big is it, both for Total and for the oil industry?

Blane: Well it’s a pretty serious problem for Total, firstly because it’s costing the company a lot of money. They’re losing $1.5 million every day in lost revenue, and they’re spending $1 million a day trying to fix the leak from the Elgin platform. But more than that, the problem for them is that they don’t know how long this will take to repair. There are two things they can do: they can drill a relief well, which will take at least six months and would be very expensive; or it may be that they can plug the well by pumping heavy mud down into it. But expensive either way.

Smith: So plugging the hole would be the faster solution?

Blane: It would be the faster solution, but also there is a safety issue there too, because at the moment, flammable gas is leaking out into the air around the platform, and of course, you put people back on board, then there must be some risk of ignition. And anyone who does that will have to be an expert. They’ve been consulting experts; they’ve been consulting people who helped sort out the problem with Deepwater Horizon in the Gulf of Mexico two years ago. So they’ve been speaking to those who know best in the industry, taking opinion from experts from all everywhere.

Smith: And you’ve spoken with some Total workers who were there when the accident happened. Tell us a little bit about that.

Blane: Well it happened very suddenly. They were alerted to the escape of gas by a stand-by ship — which is there to keep a watch on things — and they were removed by helicopter. The workers were bundled on board; there was no time to collect personal belongings, passports, anything like that. But I’m told that it was a very smooth operation, but understandably, those who were waiting to be lifted off as the gas filtered around them were extremely anxious and very pleased when they finally were able to get away from the platform.

Smith: The BBC’s Colin Blane in Scotland. Colin, thank you.

Blane:  Thanks very much indeed.