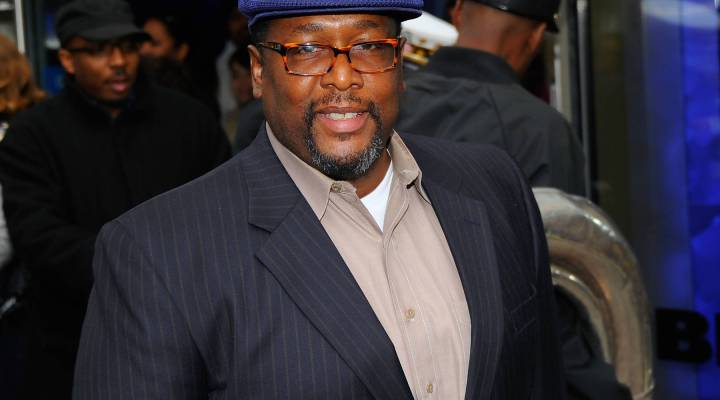 Wendell Pierce on bringing grocery stores back to New Orleans

Actor Wendell Pierce promotes 'Treme: The Complete First Season' on March 31, 2011 in New York City. Pierce is opening a chain of grocery stores in his hometown of New Orleans, a place he says has been underserved by American industry. Andrew H. Walker/Getty Images

Wendell Pierce on bringing grocery stores back to New Orleans

Actor Wendell Pierce promotes 'Treme: The Complete First Season' on March 31, 2011 in New York City. Pierce is opening a chain of grocery stores in his hometown of New Orleans, a place he says has been underserved by American industry. Andrew H. Walker/Getty Images

Tess Vigeland: We loved him as Detective William “Bunk” Moreland on “The Wire.” A man has got to have a code! You may also know him as the trombone-playing Antoine Batiste from HBO’s “Treme.”

But actor Wendell Pierce is adding a new role to his list of credits — one you probably won’t find on IMDb. In December, he opened Sterling Express, the first in a chain of grocery stores selling fresh produce and other staples in his hometown of New Orleans. Many of the city’s lower income neighborhoods — places like the Lower Ninth Ward — had a dearth of stores to begin with, a situation made worse by Hurricane Katrina in 2005.

Wendell Pierce is here to talk about why he’s stepping into the void. Welcome to the show.

Vigeland: Now, I was in New Orleans last fall, so six years post-Katrina. And this is something that can’t help but strike you driving around parts of downtown, certainly the lower income neighborhoods — the utter lack of both grocery stores and gas stations. How far do some folks have to go to get fresh food?

Pierce: You know, you look at the Lower Ninth Ward, it was an issue even before the storm because it’s a paradigm of American urban centers, where American industry and commerce sits on the sideline. They see it that it’s some place of no interest to them at times, really. And we haven’t had a decent grocery store in the Lower Ninth Ward in 20 years.

Vigeland: I first came upon this issue visiting about three years after Katrina, and the problem at the time I think was that stores didn’t want to come back to New Orleans until people came back, and then a lot of people weren’t going to come back to neighborhoods without infrastructure, including stores. Is that still part of the issue?

Pierce: There’s that Catch-22, but now people have demonstrated that they’re going to come back to New Orleans, that they have a loyalty to their neighborhoods and loyalty to the city. The thing that’s disappointing is the fact that you have American industry sitting on the sidelines. And that is the atmosphere that we’re in, and you realize that the recovery has to be comprehensive, and that was the thing that made me realize that we have food deserts and we have to meet those needs as well.

Vigeland: What does it mean in a community when you don’t have affordable places to shop for food?

Pierce: First of all, it means that people are going to buy what they can get their hands on, and it’s going to be processed, fast, quick, unhealthy choices. The thing that’s kind of a paradox, kind of ironic, is the fact that actually the very cuisine that New Orleans is known for — the men and women from those communities created it, you know? Going back hundreds of years, working-class folks in New Orleans came up with gumbos and jambalayas. We were more agrarian then, and it’s those working people that did it. And now that we’re in this urban setting, and they don’t have access to those fresh products just means that children are going to be unhealthy. We have a pandemic of diseases from obesity. It actually has less to do with this wonderfully rich food that we have; it has more to do with lesser access to fresh foods.

Vigeland: How did you decide what affordable means? Because that’s part of this too, not just fresh, but also affordable. How might your stores be different?

Pierce: It’s a matter of mark-up, it’s a matter of saying let’s take advantage of pooling resources. We’ll be a part of the Associated Grocers membership, which you know, the more memberships that you have, it grows this wholesale business that allows you to buy in larger quantities of products for a cheaper price, and then you can carry that over — the savings — to people. You know, people are paying $6, $7 for a gallon of milk.

Vigeland: Why go into the grocery business on your part? Why not try to use your celebrity bully pulpit, what have you, to maybe convince the likes of Winn-Dixie to come back? Why start fresh for you?

Pierce: Because Winn-Dixie left, and now I can spend most of my time trying to convince others to do it, or step into that void myself. If not me, who? If not now, when? If not here, where?