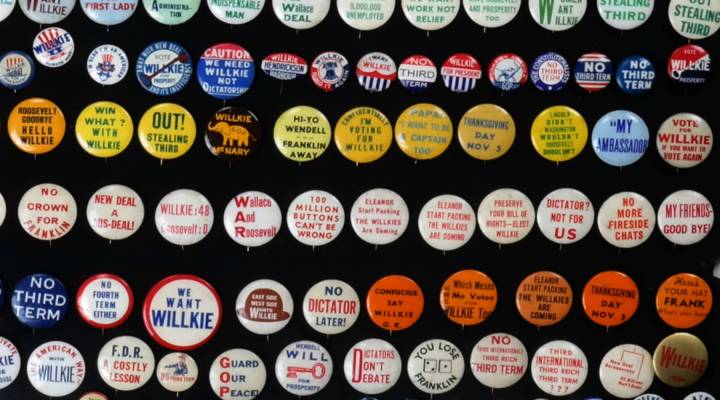 In elections before the internet, before television and before radio, there was the campaign lapel pin and the button.

Today in New York, there’s an auction of a treasure trove of these buttons from the Dr. Alan York collection. York was an optometrist and avid collector of political paraphernalia.

Looking at the buttons’ campaign slogans, one is reminded that elections in the past went low. Opponents of Franklin D. Roosevelt likened him to Hitler, and campaign pins showed elephants and donkeys engaging in lewd behavior.

Will Roland, who helps run Roland Auctions, joined us to talk about the country’s past political climate.

On the extreme comparisons used by Roosevelt’s opponents:

I know everyone’s freaking out about how vitriolic it is and how hateful everyone sounds. This is nothing. You know, FDR was elected four times and they, every time, produced millions and millions and millions of buttons that are like, “Don’t vote until you’ve seen ‘The Great Dictator.’” And they’re literally calling FDR Hitler, while Hitler is in power. I mean they’re just, they’re insane.

On Roosevelt’s campaign materials when he ran for the Senate:

When FDR was running against [Wendell] Willkie in 1940, the GOP manufactured millions of buttons. The Democrats started to put out a button that said, “All you get from Willkie are buttons.”

A series of pro-Wendell Willkie and anti-Franklin D. Roosevelt buttons.