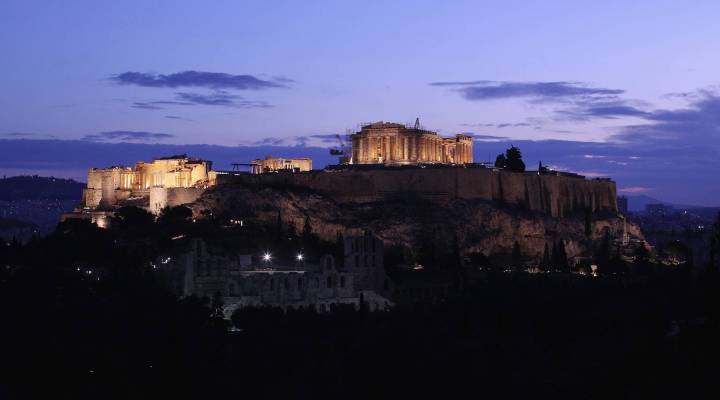 COPY
Scaffolding surrounds the Pantheon on the Acropolis as the sun rises on Februray 16, 2012 in Athens, Greece. Oli Scarff/Getty Images
Mid-day Update

Scaffolding surrounds the Pantheon on the Acropolis as the sun rises on Februray 16, 2012 in Athens, Greece. Oli Scarff/Getty Images
Listen Now

The government said this morning that the number of Americans applying for unemployment benefits ticked up slightly last week to 362,000. The four-week average remains near the lowest level in four years.

The investors who’ve lent Greece money are deciding today whether the plan to save the country is acceptable. Private bondholders have until this afternoon to decide if they’ll take major losses on their investments in order to keep Greece out of a messy default, and avoid another global crisis. Meanwhile, the European Central Bank has left its key interest rate unchanged at a record low of 1 percent, holding off on further measures to boost the shaky economy in the 17 countries that use the euro.

McDonald’s reported a smaller-than-expected rise in February sales at established restaurants across the globe, weighed down by weakness in Europe as well as Asia.

The dairy industry group behind those “Got Milk?” ads… is shifting its tastes a bit. The new message is… “Got CHOCOLATE milk?” And it’s not just for kids. An ad campaign being launched next week is using a long list of athletes, who say they “re-fuel” with chocolate milk. The ads cite an industry-sponsored study from three universities. It concluded that recreational runners who drank fat-free chocolate milk ended up running 23 percent longer, compared to those who drank carbohydrate sports drinks. Some nutrition experts say the industry is really pushing chocolate milk because its consumption has been dropping since many school districts have soured on it.