Techies on the cutting edge… of bike commuting

Techies on the cutting edge… of bike commuting

Kai Ryssdal: Imagine in your mind’s eye the prototypical tech company employee. A laptop in their shoulder bag, smartphone in hand, a very cool bike underneath them. As the tech sector expands, biking to and at work is expanding right alongside.

From the Transportation Nation project at WNYC, Andrea Bernstein reports.

Brendon Harrington: Everyone is pedaling simultaneously but they’re all facing each other.

Harrington: Imagine one person facing forward and then the other six people around a circle. And the way the bike is manufactured and constructed, everyone can actually peddle at the same time — all contributing to propel the bike forward. But since they’re facing each other, they can chat with each other, they can share ideas, they can have a team meeting if they’d like.

That’s pretty much the way it is in the tech sector these days. Companies are in a race to outdo each other on bike friendliness. Google not only gives employees racks and lockers, the company will donate to charity if employees ride to work. Etsy’s got an in-house bike mechanic. In New York, Foursquare just chose a new location for it’s headquarters, based on where biking would be easy.

Dennis Crowley: I never think of this as going to work everyday. It’s just, hey this is where I go to do the stuff I like to do and I ride my bike to get there.

When Foursquare CEO Dennis Crowley was raising money from venture capitalists, he pedaled to pitch meetings.

Crowley: I might have got a couple of weird looks when you walk in and your T-shirt is a little bit sweaty.

Crowley got the money and his company is wildly expanding. For him and other tech CEO’s, not having a place to store bikes in the office would be like building a suburban campus without a parking lot.

Crowley: It was not an option to be in a building where people would have to leave their bikes outside.

It’s not just an amenity. For Foursquare and the other firms, having a bike-friendly culture spurs innovation.

Crowley: We talk about Foursquare as being — as like creating software that helps people change the way that people experience or even use cities, and I think bikes do the same thing.

Mitchell Moss: Biking has become the mode of choice for the educated high tech worker.

Mitchell Moss runs a transportation think-tank at New York University. He says the company that can get the most creativity, and the most collaboration, will win in the 21st century economy.

Moss: The modern office today is not really just a workplace. It’s a play place, so if you got to Mozilla they have pool tables.

At Foursquare, there’s a ping-pong table and a dart board. Crowley seems a little shocked to see, even in the brand new office, the bike rack is almost full.

Crowley: I don’t know, I’m actually sizing this up now and seeing I guess we’re going to need a couple more racks. I don’t know, I guess we can probably put some more around the corner if we needed too. 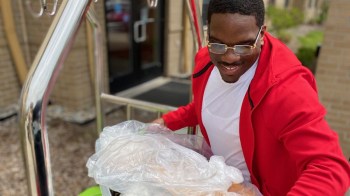 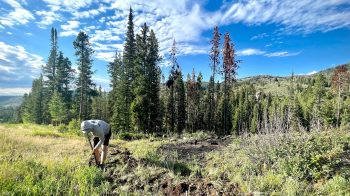