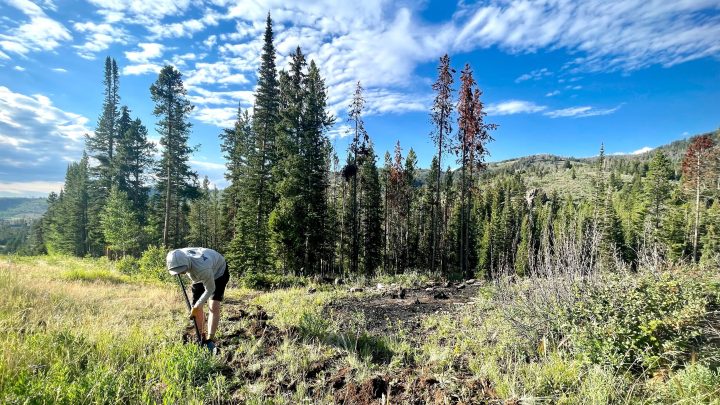 On a recent weekday evening in the mountains near Pinedale, a rural town in western Wyoming, a few people from the local trails group were using their shovels to dig trails. Sublette Trails Association member Ryan Grove explained the plan to Paul Swenson:

“Try and curve it back, and just kind of sneak in so it’s not fall line the whole way,” Grove said. “And then we’ll put some drains into it.”

These trails were built for downhill mountain biking back in the late 1990s.

“Maybe a little too early for downhill mountain biking in the West, which is now exploding in popularity,” said Alex Artz, another member of the group. “These trails are still used and usable, but they definitely need a lot of improvements.”

Pinedale is pretty small, with about 2,000 people. A boom-and-bust kind of town, its main industries are agriculture and natural gas production.

But the area has about 750 miles of trails, and many of them are just outdated. Some go straight up the mountain without any switchbacks and others are completely overgrown, which is common in many rural areas of the West.

Many old trails came from cattle movements, wildlife migration or old logging roads. In Wyoming, some see trail updates as a way to boost tourism and help diversify the economy. Coal mining in the state hit a 50-year low in 2020, and the last major natural gas boom was in 2009.

According to the group American Trails, recreation trails are linked to economic growth.

“My office is sort of coming of age at a really important time in Wyoming history,” said Patrick Harrington, the manager of the Wyoming Office of Outdoor Recreation.

In 2020, at the height of the pandemic, Wyoming saw a record number of visitors who came to explore the state’s public lands.

“We’re looking at development at a grand scale and what the future of our state is going to be,” Harrington said.

But that development is expensive. Harrington estimated that it costs about $50,000 per mile of new trail. Recently, he said the state received millions from the American Rescue Plan that will go toward trail development. The state is also exploring the idea of charging fees to use the trails as a way to help cover costs.

But not everyone loves all this change; many people live in Wyoming for its solitude.

“People don’t want their community to be overcrowded,” said Wyoming state Rep. Jim Roscoe. “I have to agree with these people that I don’t want my backyard to be overrun either. But one thing about recreation is it’s a shot in the arm for the economy.”

Roscoe said if enough planning goes into building outdoor tourism, he thinks some of that solitude can still be preserved. He is sponsoring a bill next year that would provide $40 million in funding to help develop trails in small towns, both for tourism and the local community.

The Sublette Trails Association, which is made up of volunteers, recently landed a grant for $5,000 that has helped with purchasing shovels and other trail-building tools.

But they, too, want to be careful with the development. Association member Alex Artz said he does not want Pinedale to become a huge tourist town.

“We just want to improve things for the people that are already here,” Artz said.

The rural feel is the reason he lives in Pinedale, adding that better trails will help the whole community.