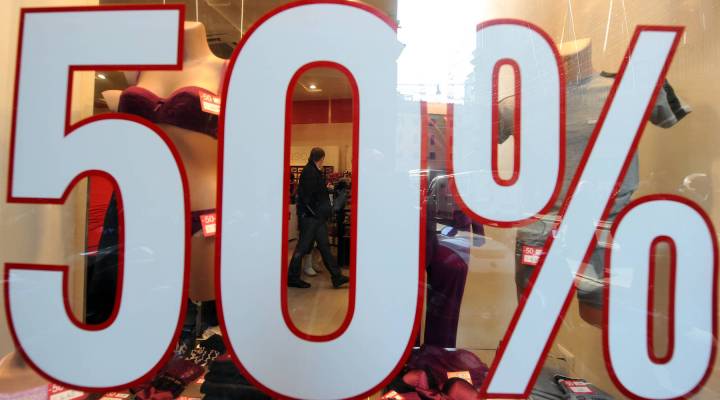 In retail, 50 percent off is not the same as being off 50 percent of the time. GABRIEL BOUYS/AFP/Getty Images

In retail, 50 percent off is not the same as being off 50 percent of the time. GABRIEL BOUYS/AFP/Getty Images

Kai Ryssdal: We mentioned a couple of days ago — last week, I think — that 2011 was a record setting year for American retail: $5 trillion in sales, give or take.

Today, though, some context for that figure. A report from The Retail Action Project — it’s a group that represents retail workers in New York — they say most retail work is now part-time. And racking up enough hours to get by is getting harder.

Jay Cole: This is a Facebook group page where we switch shifts.

Stacey Vanek Smith: Eighteen-year-old Jay Cole works as a cashier at Abercrombie and Fitch. He’s checking a Facebook page on his iPhone. Workers from his store have set up a kind of trading post for shifts.

Cole: This one says, “Any 4-9s today? Any shifts for tomorrow, text me.” Basically they’re just begging for shifts. It’s very competitive. Once a shift is posted, within seconds, it’s gone.

The sour economy has put more workers in Cole’s position says Carrie Gleason, director of the Retail Action Project, a partner with a retail union.

Carrie Gleason: I’ve seen an increase in unpredictability and people are not getting enough hours.

Gleason says that those constantly changing schedules put stress on workers. More than half of retail workers surveyed were part-time. A third said they’re supporting their family.

Frank Badillo is senior economist with Kantar Retail. He says stores have been saving money by scrapping full-time, full-benefit positions. Part-time workers can ebb and flow with demand.

Frank Badillo: As we’ve come out of this recession, many shoppers have remained very value focused. That has continued to put pressure on many of these retailers.

It’s not just retail workers. More than eight million Americans are working fewer hours than they’d like, says economist Tom Nardone with the Bureau of Labor Statistics. That’s roughly double what it was before the recession.

Eighteen-year-old Jay Cole supports himself with his part time Abercrombie job. He makes $9 an hour.

Cole: It’s really tough, especially when they give you 10 hours a week, that’s just $90. I have bills, like really expensive bills to pay like $500 a month.

Cole says he needs 25 hours a week to pay the rent.