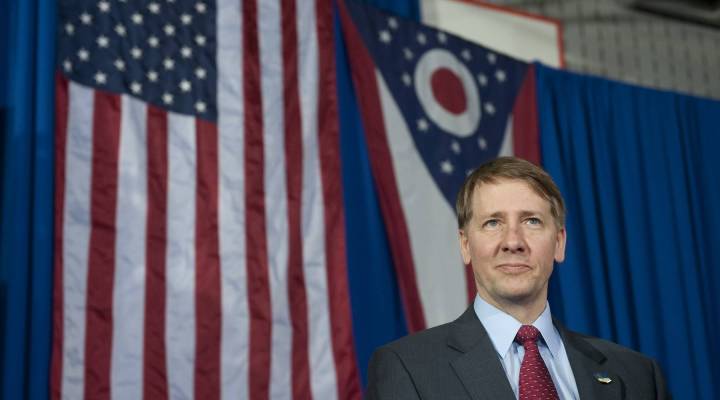 Cordray’s plans for the CFPB

Cordray’s plans for the CFPB

Tess Vigeland: Imagine taking a job and then getting hreatened with a lawsuit the day you start! But that’s the situation for Richard Cordray, new chief of the Consumer Financial Protection Bureau.

Last week, President Obama used a recess appointment to usher Cordray into office. But a lot of people are asking questions, like was the Senate actually in recess? And that could mean a slew of lawsuits as Cordray starts to take action. But he’s moving ahead and joins us from his office in Washington. Thanks for being with us.

Vigeland: First of all, I know you’re a five-time “Jeopardy” champion. So I’ll be giving you answers and then you can respond in the form a question. Does that work for you?

Cordray: That keeps them short, too.

Vigeland: Certainly does. I think what most people know of the CFPB up to this point is the agency has been trying to simplify a lot of paperwork around everything from credit card statements to mortgage applications. What would you say are your top three priorities right now?

Cordray: Well, I would say that continuing that work is a high priority. The “Know before you owe” project, because what we find is consumers in the marketplace often are baffled and confused by a lot of fine print, by offers that are hard to follow, that may be potentially misleading or deceptive to them. Cleaning that up, simplifying and clarifying language is quite important to consumers can make better-informed decisions that they can live with.

At the same time, another priority for us — now that we have a director; we could not do this before — we can now police the non-bank arena. We saw this in the mortgage market in the lead up to the financial crisis: Many mortgage brokers and others were not held to the same standards and principals of law that the banks were held to. And they undermined the market and it really destroyed the mortgage market in a way that the country, unfortunately, is still grappling with the residues of that crisis.

Vigeland: And payday lenders, would that be another one?

Vigeland: As Ohio attorney general, I know you did a lot of work on the foreclosure issue — taking action both against the scam artists who were saying that they could help them with their problems and also trying to get banks to clean up the process. Now, at the CFPB, what do you think needs to be done in that area? And what do you have power over?

Cordray: Well, the good news is that going forward, we have broad power over the mortgage market, including mortgage servicers and frankly, the fraudulent scammers who have caused so much harm. Some of those mortgage servicerss were bank-related, some were non-banks, that marketplace was very fragmented before. It was a broken model that didn’t work very well. Going forward, we will have three types of authority over the market: Number one, we can supervise these institutions directly; we can send examiners in. They can get access to all the information they need and they can work with the institution to correct problems very quickly. Second, if need be, and we have the authority to bring enforcement actions to enforce the law. Third, we have the ability to write rules that can govern the entire market, rather than taking institutions just one at a time. So, we have a very good set of tools to address the problems that really brought this country to its knees in 2008.

Vigeland: But what about the current foreclosure crisis? Not just the things that happened to get us here, but do you have any way of pushing the process that banks are currently putting people through? Do you have any way to clear out what is still a very big mess in the housing market?

Cordray: We do have some authority. Our authority is more prospective than it is retrospective.

Cordray: However, in terms of mortgage servicers, whether they are treating their customers properly, some of the advancements that are being made to ensure that there’s a single point of contact, that they’re not parallel proceedings, where someone’s trying to get a modification and is being foreclosed upon at the same time. There are going to be adjustments there. But the problem that happens is you get a major crisis like we had, there’s a lot of unfortunate consequences. We can’tundod the building that crumbled. What we could do is make sure that the markets work better. And there are certain things we can do about the ongoing problems that can make them better, yes.

Vigeland: Mr. Cordray, where do you draw the line when it comes to consumers beingresponsiblee for protecting themselves? Caveat emptor versus needing the government to help protect them. At what point is it up to us to make sure that we read the fine print and understand the terms of a mortgage?

Cordray: I’ve always been an advocate that it’s both things. I think there’s a role for consumer protection. But at the same time, consumers have to take responsibility for own decision making. People have to be able to protect themselves. But when people are in the marketplace and they’re being victimized by fraud or terms are being hidden from them, it is not always easy to know the details of everything that happens at our mortgage closing. So we want to both simplify and clarify the marketplace to make it manageable for consumers, but at the same time, we want consumers to have the power to make good decisions for themselves.

Vigeland: You mentioned financial literacy and I know as Ohio state treasurer, you wanted it to be a requirement for high school graduation. Particularly through the Office of Financial Literacy there within the bureau, what can you do as head of the CFPB to make financial education a priority?

Cordray: We did succeed in Ohio for making it a requirement for every high school student, they had to have personal finance education before they graduate. Many children, unfortunately, do not get good guidance at this at home. So this is a big part of our new watch dog bureau to help empower consumers across the country. Financial literacy will be a big portion of that and other things as well.

Vigeland: Richard Cordray, thank you so much for joining us.

Cordray: My pleasure Tess. Thank you.