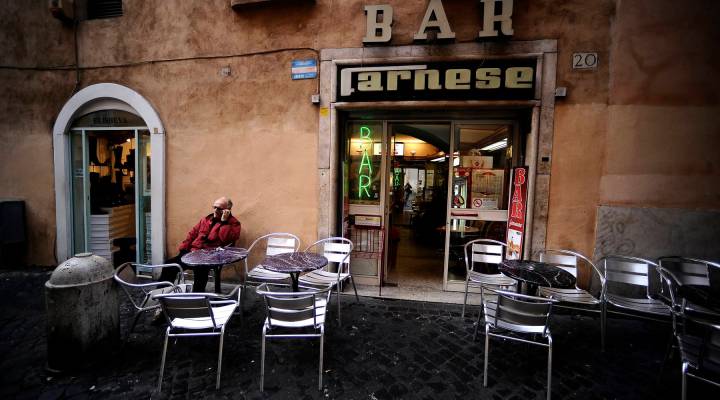 A man sits at a cafe terrace on December 2, 2011 in Rome. Businesses throughout Italy could soon be open much longer hours. FILIPPO MONTEFORTE/AFP/Getty Images
BBC World Service

A man sits at a cafe terrace on December 2, 2011 in Rome. Businesses throughout Italy could soon be open much longer hours. FILIPPO MONTEFORTE/AFP/Getty Images

Stacey Vanek Smith: One thing weighing on the markets this morning: worries about Italian bank, Unicredit. Italy’s Prime Minister Mario Monti has been passing measures to try and stimulate the country’s economy. For instance, starting January 1st, stores can legally stay open 24-hours a day. Italian stores had been restricted before — many couldn’t sell on Sundays or late nights.

Smith: How will keeping shops open 24/7 help the Italian economy?

Johnston: Well, it’s not just shops that are affected, it’s bars and restaurants as well. And the hope is that you’ll get a much more flexible sort of commercial environment, and shoppers are expected to like it.

Smith: There have been some serious objections in the last few days from what I understand, though. Why are some Italian shopkeepers against this?

Johnston: They worry that what you’re seeing here is the coming of a much more cut-throat, much more competitive type of environment. The shopkeepers say: if Italians don’t have any money — which they don’t at the moment, they would say because they’re taxed too heavily — then it doesn’t matter how long you stay open if the people haven’t got their cash to spend. The shopkeepers are opposed to this; they just want the government to look elsewhere for solutions to the economy’s very serious problems here.

Smith: Well, Alan, speaking of that — what are some of the other efforts that have been made to encourage Italian competitiveness?

Johnston: What we’ve seen so far has been cuts in government spending, and new taxes. But now we’re about to see what the government calls “Phase 2,” which is an effort to find ways to stimulate the economy, to create growth — which Italy very much needs — and to create jobs for young people.

What you notice really strikingly is that so many of the best and brightest young Italians tell you that they don’t feel there’s any future for them here, and that they’re talking about going away almost anywhere, work abroad where they feel they have more opportunities. And there’s going to be a lot of confrontation along this sort of battle line here in Italy in the months ahead.

Johnston: Thanks very much.