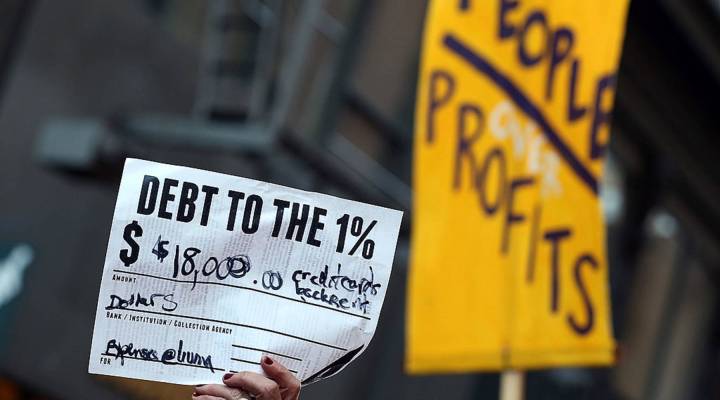 We’re digging into the results of our latest Marketplace-Edison Research poll.  This time we asked whether people feel the economy is rigged in favor of certain groups.  Almost 71 percent of the 1022 people we polled said yes.  That includes majorities of Democrats, Republicans, young, old, rich, poor, blacks, whites and Hispanics.

About 83 percent of the African Americans we polled felt this way.  Including Brad Lewis.

He lives in Washington’s Anacostia neighborhood.

I step into Lewis’  bright yellow house.  I find out he’s 57. He’s a health benefits consultant. One way he sees the economy as rigged?  The struggle to get a loan. Or credit card.

“So, it’s much harder to get good credit if you’re a lower or moderate income person of color who lives in an urban area,” he said.

Brad Lewis in front of the home he owns in Washington’s Anacostia neighborhood.

“I do sometimes feel like I’m clinging to the middle class because just the daily or the monthly expenses are getting higher and are you’re wondering – well my income isn’t necessarily matching that,” he said.

Lewis chats with his neighbors about this all the time. They feel the same way.

He picks up the phone and calls one. Crystal Banks comes right over.

“Someone who’s just getting out of prison who really, really wants to get a job and do the right thing,” she said. “And they are not able to, because they have this thing that follows with them.”

I tell Banks  that I talked to someone who answered our poll, who considers himself wealthy.  And even he agrees the economy is rigged.  For him. He’d even be willing to pay more taxes.

Alan Johnston and Anne Cross at home in Kensington, Maryland.

The guy is Alan Johnston. I went to see him, too.  Along with his wife, Anne Cross.

We sit down across from a brick fireplace in their sunny, antique-filled living room. Alan and Anne live in the Maryland suburbs of Washington.  They’re both demographers.  He’s retired.  She’s semi-retired.  Johnston was the first in his family to go to college. He worked hard over the years. He’s saved up enough money that now he says, he’s in the top five percent.

Now, I asked everyone I interviewed if the economy can be unrigged- fixed so it’s more equal.  Everyone said yes, but Alan Johnston was the only one who had a specific plan. He’s thought about this a lot. He wants to make the tax system more progressive, so the rich would pay a bigger share of their income to the tax man. He said he knows lots of people who feel the  same way.

“Yes, we talk about it,” he said. “And, if they have enough income, then they have to pay more taxes, then that’s fine with them.”

There’s just one problem, said Barry Lynn. He directs the Open Markets program at New America.  He researches economic inequality. And he said there’s a growing gap between the very rich in the top 1 percent, and the Alan Johnstons in the top five percent. A gap the five percenters don’t even see.

And Lynn said the very rich – those in the top half percent?  Are doing fine under the current system, and may not think it’s rigged at all.