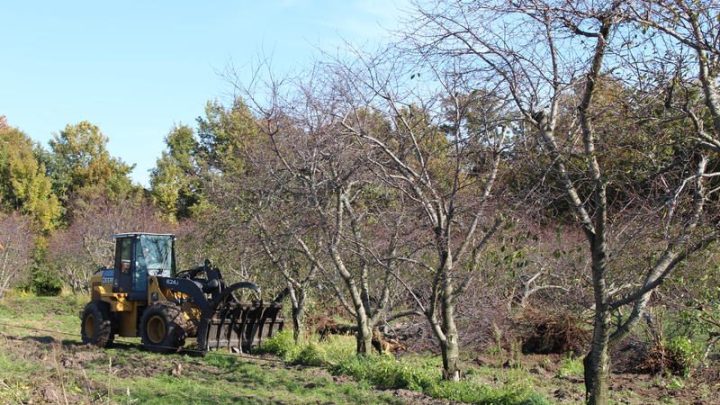 COPY
Thirty-year-old tart cherry trees are removed from Bardenhagen Farms in Suttons Bay. Farmer Jim Bardenhagen says he can’t afford to maintain them while the price of cherries is so low. Max Johnston

Thirty-year-old tart cherry trees are removed from Bardenhagen Farms in Suttons Bay. Farmer Jim Bardenhagen says he can’t afford to maintain them while the price of cherries is so low. Max Johnston
Listen Now

A small fruit industry in Michigan finds itself stuck in the middle of tensions between the U.S. and global trade partners. The Trump administration’s hard-line stance on international trade was supposed to help out American companies, but tart cherry farmers in northern Michigan say they’re getting priced out by foreign competitors, like Turkey. Tart cherries are used in things like cherry pies and turnovers. Now, some farmers are leaving the business because they say they’re not making back their costs. Since 2006, the state has lost 160 tart cherry farms.

A version of this story previously appeared on Interlochen Public Radio.