KAI RYSSDAL: There was a big United Nations meeting in Copenhagen today about the famine and growing humanitarian crisis in Somalia. Drought has left four million people there and in other parts of East Africa without enough food. Relief agencies say they simply don’t have the resources to keep up. Some social entrepreneurs, though, in the northeast United States say they might.

SUSAN SHEPHERD: The sprawling settlement of Kibera, Kenya, is one of the largest slums in the world. Nearly 200,000 pack its dirt paths and metal shacks. Children are 15 times more likely to suffer from malnutrition here than in Kenya as a whole.

Kanini is one of the many kids who pass through this health clinic in Kibera every week. She sits on her grandma’s lap as nurses examine her. Kanini’s a year and a half, but she’s got the spindly legs of a five month old and can’t walk.

Angeline Wangiku is one of the nurses.

ANGELINE WANGIKU: The parents gave birth to the child. She was so underweight. She has been malnutrition all through.

In clinics like this around the world, the best-known treatment for malnutrition is something called Ready to Use Therapeutic Food. It’s made from peanuts and comes in a foil packet Relief agencies call it a breakthrough and are using it to provide calories and vitamins to roughly 2 million kids who don’t get enough to eat. It needs no refrigeration or water.

The only thing it does require is money. And one place that’s coming from is a start-up called Two Degrees Food. Lauren Walters is one of the co-founders.

LAUREN WALTERS: We make these healthy, nutritious, gluten-free bars, Two Degrees bars. And for every bar that is sold in the United States, we purchase and donate a nutrition pack to a severely malnourished kid.

It’s yet another energy bar in a market that’s saturated with them. But their strategy to stand out from the crowd is to play up the hunger-relief side of their business model.

And it’s worked with Karen Bugus. She’s the food buyer for a chain of upscale coffee bars in the Northeast.

KAREN BUGUS: There are so many people that want to sell things, especially in a coffee store like this. I don’t want to clutter the register with items that don’t mean something.

The chain gives 2 percent of its profits to local charities, so Two Degrees appealed to her.

LEIGH FIRN: I think this has the potential to be a very good investment opportunity. I wouldn’t have put money in it if I didn’t think that way.

Since January, the company has sold nearly $200,000 in energy bars. And it’s contracted with relief agencies to distribute 60,000 nutrition packets. The first shipment arrived in Kibera last month.

Nurse Angeline Wangiku says it should help reverse the ravishes of malnutrition in a kid like 18-month-old Kanini.

WANGIKU: I’ll say the much this child will get from this supplement — it’s going to save a child’s life.

Two Degrees co-founder Lauren Walters says the company’s on track to donate 150,000 more packets by the end of the year. 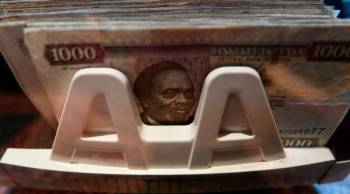