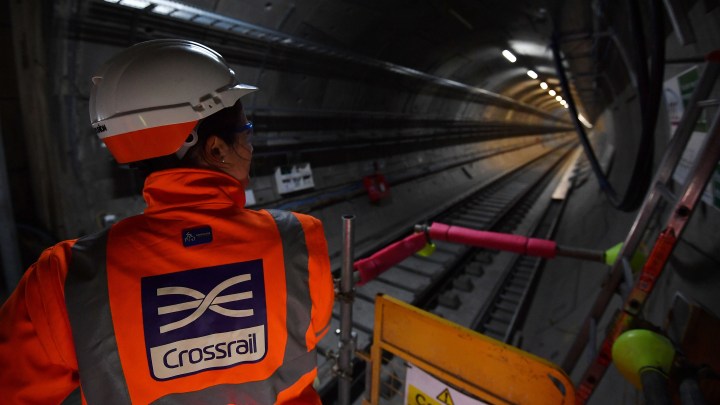 A worker looks along a train tunnel at the Canary Wharf Crossrail station in London in 2017. Ben Stansall/AFP via Getty Images

A worker looks along a train tunnel at the Canary Wharf Crossrail station in London in 2017. Ben Stansall/AFP via Getty Images

Europe’s biggest infrastructure project has been delayed — again. Crossrail, the British company building a 60-mile rail line from east to west across London, says that the line won’t be finished until 2021, at least two years later than scheduled. Rail industry analysts say it could take even longer.  The company blames software and signaling problems for the delay.

The cost of the project, launched 10 years ago, has spiraled to $23 billion, $4.5 billion over budget, and the line’s late arrival has dashed the hopes of increased revenues for scores of small businesses located along the route.

“People are now talking about an opening date of maybe 2022,” said Nim Bhadare, owner of Abbey Wood Station Minicabs. “That would be almost four years after the planned opening. It’s a disgrace,” he said.

Bhadare bought the taxi company five years ago, hoping to benefit from the extra traffic Crossrail would bring. The company is located next to Abbey Wood train station in southeast London, one of the two eastern terminuses of the new line.

“To handle the increased traffic we were expecting, we spent well over   30,000 pounds [around $40,000] on a sophisticated new server,” Bhadare said. “That’s big money for us. But since the new line isn’t operating, the server is working at only 30% capacity. We don’t have the extra footfall we need. We’re not getting the extra business. Will we survive? I don’t know.” He added that if he had known that Crossrail might not be running until 2022, he would not have bought the business.

Two doors away in an almost empty hairdressing salon called West End Styles, owner Linda Williams also complains bitterly about Crossrail. The layout of the new station at the end of her road has restricted the flow of local people past her shop. And because the new line still isn’t operating, there hasn’t been the extra traffic to compensate. Williams is scathing about Crossrail’s management.

“All these people are wasting millions of pounds with something that’s not running that they promised us would be up and running,” she said. “And we were all going to benefit from it. None of the promises have come true.”

Tempers are fraying elsewhere along Crossrail’s route. In central London, near the new Tottenham Court station, Rowena Howie is also angered by the delayed opening of the new line. She moved her successful fashion boutique, Revival Retro, into premises just off Tottenham Court Road five years ago in anticipation of the extra traffic.

“What I was hearing back then is that Tottenham Court Station would have more footfall than Heathrow Airport,” she said. “As it is, we have just enough traffic to just about keep us going, but we moved here for growth. And we’re not getting it.”

But she will, insists Crossrail. The company trumpets the scale and the benefits of the new line. Stretching 60 miles from the city of Reading and Heathrow Airport in the west to Abbey Wood and Shenfield in the east, the line passes through 26 miles of tunnel under central London, will serve 41 stations and carry an estimated 200 million passengers a year. Getting around the capital will be much easier. The journey time between Heathrow and London’s financial center will be almost cut in half to 34 minutes.

The sheer scale of the project, however, helps to explain the delays and the cost overruns.

“It’s probably more complex and challenging than building a nuclear reactor,” said Philip Shepherd, a consultant who’s advised governments and banks on rail projects around the world. “The trouble is, when contractors bid for a large and complex scheme like Crossrail, they almost always understate the costs and the difficulty. If they tell the truth, they won’t get the job because they’ll be more expensive than their competitors,” Shepherd said.

“We don’t go into these projects with the right level of honesty at the beginning. So things inevitably go wrong.”

Nevertheless, Shepherd described Crossrail as a “medium-problem project,” and he said “it’ll be great when it’s finished.”

Yes, respond the small businesses along the route, weary with waiting, but when will that be?