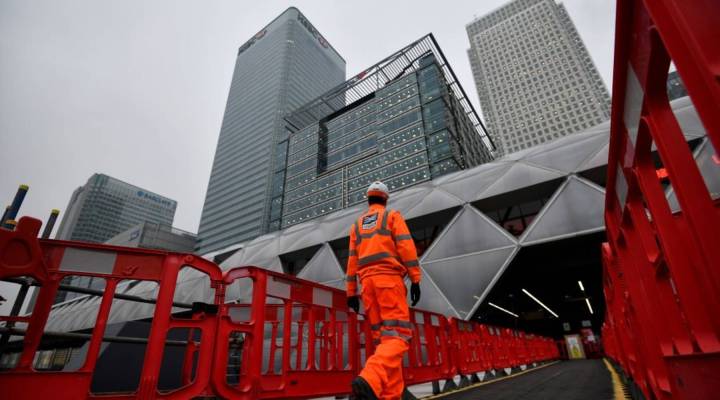 COPY
A worker walks toward the entrance of the Canary Wharf Crossrail station in the financial district of London in February. BEN STANSALL/AFP/Getty Images

A worker walks toward the entrance of the Canary Wharf Crossrail station in the financial district of London in February. BEN STANSALL/AFP/Getty Images
Listen Now

Getting around London is about to get easier. Crossrail, a massive new east-west railway set to open across the city next year, will cut ride times by about half and bring an additional 1.5 million people within 45 minutes of the city center. It’s also bringing up housing prices.

Gráinne Gilmore, head of United Kingdom residential research at the global property consultancy Knight Frank, calls this the “Crossrail effect.” Her analysis shows prices are up an average of 7 percent more in places along the new train route compared to the rest of the market.

“We’ve seen some areas of real out performance in East London,” Gilmore said. “One of those most particularly is Forest Gate.” Prices in Forest Gate, a neighborhood in London’s Newham’s borough, have risen 81 percent since Crossrail construction got the green light in 2008.

“It used to be the further out you moved, the cheaper it was,” said Laura Knight, a graphic designer who’s lived in Forest Gate for five years. “Even that feels like it’s not really a thing anymore.”

Knight, who moved to the area when she could still afford to buy there, owns a two-bedroom apartment. Her ride to Bond Street in central London is about 40 minutes now; when Crossrail opens, it’ll be just under 20.

“I feel very lucky, very privileged,” Knight said, “but I don’t have to look far to see people that are in a different boat to me really.”

Just a couple miles down the road is Custom House, another neighborhood on the planned Crossrail line. While rents and home prices haven’t skyrocketed here just yet, plans for new apartments, shops and offices are in the works.

Commuters walk past London’s Farringdon Station, which is set to become a central stop on the planned Crossrail line.

Every other Friday evening, residents gather at a local church for a meeting organized by the People’s Empowerment Alliance for Custom House. They come together to discuss how new development plans will impact public housing.

“The area that we’re in, like everyone knows each other,” said 28-year-old Samantha Napa. She’s a mom with two kids, who works for a financial firm in the city. “Neighbors know each other, so it’s nice, like if I’m going to shop, I can always drop my son at the neighbors’.”

Napa is one of hundreds of Custom House residents who have been moved out of publicly run housing while local authorities work to kick off a multimillion dollar revitalization scheme near the Crossrail station. She’s been temporarily placed in an apartment managed by a private landlord. On top of paying a higher rent, Napa’s worried she’ll be pushed out of the area completely.

“It actually scares me. It’s good to progress and redevelopment — I’m happy for that, I’m all for that,” Napa said, “but when it’s affecting our lives and stuff and we’re not priority, I don’t like it.”

Local officials say there will be no cutback on public housing in the area. For Napa, that’s no guarantee, she’ll have to rebid for the spot she lost.

As for renters and buyers, experts predict new development will raise prices, which could make Custom House more like the rest of London’s market: good for owners, good for developers, but not at a price that everyone can afford.