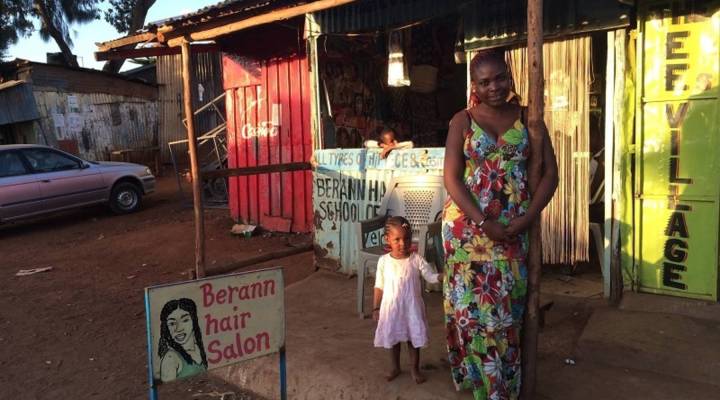 COPY
Sharon Ogolla stands in front of her salon in Kibera. Dan Bobkoff

The residents of Kibera, in Nairobi,  have a message for foreign aid groups in their community: if you want us to come hear what you have to say, you need to pay us.

So many non-governmental organizations (NGOs) have flooded this poor area that many locals have become disillusioned by the foreigners who say they want to help.

Inundated by invitations to go to meetings and trainings put on by NGOs, the  residents now seek compensation for their time. The handouts, known as “sitting allowances,” generally range from about $1 – $3 per hour, which can buy a fair amount here.

Locals point to Doctors Without Borders, which operates this hospital in Kibera, as a bright spot in the NGO community.

“Trust me, no one will go without the sitting allowance,” said Sharon Ogolla, 20, as she stands outside the hair salon she runs with her mother.

Asked whether most locals go to hear what the NGOs have to say, or just to collect the payment, Ogolla said, “Well, both, but mostly, honestly, to get the fee.”

Some Kiberans say a small number of the dozens of groups do real good, like Doctors Without Borders, but many more, these critics said, are ineffective, fly-by-night, or at worst, using locals to raise money abroad.

Despite millions of dollars flowing in, critics like Ken Okoth, a member of parliament who grew up in Kibera say residents have seen little benefit from most groups, so they might as well get some cash out of the meetings. “Time is money! We have no time to waste,” Okoth said.

The majority of NGOs came to Kibera in the last decade, following post-election violence and the AIDS epidemic. But as Okoth tells it, many of these groups don’t have much to offer. “There’s only 50 times you can teach somebody how to wash their hands. So we have NGOs calling people saying, ‘Come, we’ll teach you the importance of hand-washing.’ So if I’m broke and bored I’ll come to listen to you,” Okoth said.

Ibrahim Maina (right) used to get by from NGO cash handouts. Now he criticizes the practice.

Accurate statistics are hard to come by in Kibera, but by one estimate, roughly four in five groups pays sitting allowances. There are enough groups having enough meetings, and handing out enough cash, that some locals make something of a living going from meeting to meeting.  They’ve become known as “professional attendees.”

“I know the professional attendees,” Okoth said. “I celebrate their ingenuity of taking advantage of people who have come to take advantage of them.”

A few years ago, Ibrahim Maina was one of them. Now, he’s soured on that life, and criticized his neighbors who live off the NGO fees, saying it creates a culture of dependency. “They only wake up in the morning, they want to know where are the workshops? Where are the meetings? Because these NGOs have spoiled their mind,” he said.
Maina has a real job now. He works for Kounkuey Design Initiative, one of the few groups that does not pay the sitting fees.

Walk around with Maina, and you’ll see a Kibera that’s not a sad place, but a bustling slapdash metropolis. Its buildings may be built out of corrugated iron, and it may have smoldering trash piles. But it also has nearly everything you’d find in any city: dry cleaners, butchers, electronic shops, office supplies (you can even get documents laminated), hotels, and more.

“Everything is here,” Maina said.  Maina is on his way to find us a meeting where NGOs pay. After sending some text messages, we set off.

And eventually, we arrive at a two story building. The sign outside reads: PeePoople. It’s an NGO.   “We advocate strongly on handwashing,” says Medina Abakar, the manager of the Peepoo Community Programme in Kibera. The group offers biodegradable toilets in addition to its hygiene lessons.  Yes, she says, they pay the locals to come.

“When you ask people to come to your meeting, they leave all their businesses and they come to the meeting. So you’ve wasted their time. So you have to balance the situation,” Abakar says.

She won’t let us stay for the meeting. Donors are visiting, we learn.

Many Kiberans said they’d like some groups to leave, but dig deeper and it’s more complicated. It’s become an NGO economy. They provide jobs as well as cash.

But some people resent the system. And as if to underline that, as we’re leaving, a woman in the distance yells something in Swahili in my direction. My translator laughs and says she assumed I was from yet another NGO and told me to “take my condoms back to Sweden.”

She saw a foreigner, and in Kibera, that’s  not the worst guess.