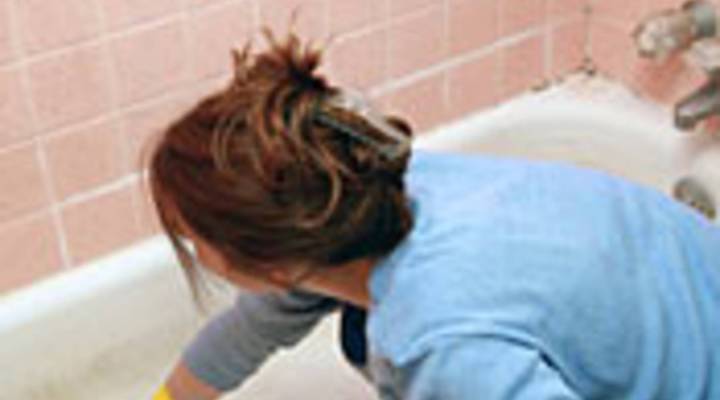 Cleaning up your credit score

Cleaning up your credit score

David Brancaccio: We wanted to do more than just wish people with bad credit reports good night and good luck, given how many Americans are just a layoff or illness away from a crumbling credit score. The question is, can much be done?

Adam Allington reports from St. Louis Public Radio, there are ways to clean it all up.

Adam Allington: Nicole Shelledy’s first experience with credit was relatively innocent. Just one of those low-limit cards they offer at clothing retailers. But it wasn’t long before all that changed. Her high 700 credit score paved the way for more and more debt.

Nicole Shelledy: I was able to open pretty much any credit card I applied for, and I was able to get my limits raised. So the higher they went, the more I spent.

At one point, Shelledy had so much debt that she sometimes had to skip credit card payments, which killed her credit score.

Shelledy: I’m actually afraid to look at it today.

Allington: Why are you afraid, what do you think it might be?

Shelledy: It’s gotta be back in the 500s at least I’m sure. It’s scary to see how far I know it’s dropped.

Now, at 28 years old Shelledy is gradually paying down her debt, but not without some creative choices, including selling her eggs to fertility clinics.

Shelledy: I think if I had good credit and not a lot of debt I might have considered it once. But I’ve done it four times.

And while that might seem like an painful way to manage debt, it turns out that our brains are actually register spending as pain and credit softens the blow of big purchases.

Cynthia Cryder: You see the price and your brain goes, “Ouch!” And in fact, they’ve seen this ouch on brain scans.

Cynthia Cryder teaches consumer psychology at Washington University. That “ouch” she describes is the pain of paying.

And the process of accumulating debt is lined with traps, missed payments, variable interest rates, all of which send credit scores plunging. And once you’re down, there are few quick ways back up.

Anisa Sharif: There’s no magic wand that’s going to fix your score and increase it 200 points.

Anisa Sharif is a credit and debt counselor at Personal Debt Solutions. Sharif says there’s lots of legitimate companies that will clean up your credit store — including haggling with lenders to remove credit-score blemishes in exchange for paying the balance off.

Sharif: Well, an average credit repair program costs about $300-$500, in that range. And that would definitely improve your score from 40 points onwards and sometimes 40 points is really what anyone needs.

That’s about all Randall Nicholson needed to improve his credit score. He and his wife were looking to move into a bigger house. They were shocked when their mortgage was denied.

Randall Nicholson: We have two kids and there’s only two bedrooms, so they’re sharing a room and we really needed to get a new house and we had no idea what to do.

It turned out they only had a few missed payments on long-forgotten accounts. So they decided to hire a credit counselor.

Now Nicholson pulls out his laptop and shows me his score.

Nicholson: So as you can see here, the highest actually bumped to 724, and I think originally our credit score was in the… I want to say 650, around there.

Within six months, Nicholson was able to buy that bigger home. And even though the process of cleaning up a credit score can be frustrating, the rewards for good credit have never been higher. Home mortgage rates continue to drop, in some cases as low as 3.75 percent, but only for people with stellar credit, around 750 and up. Which means a $300 or $400 investment to clean up your credit could come back as much bigger savings.