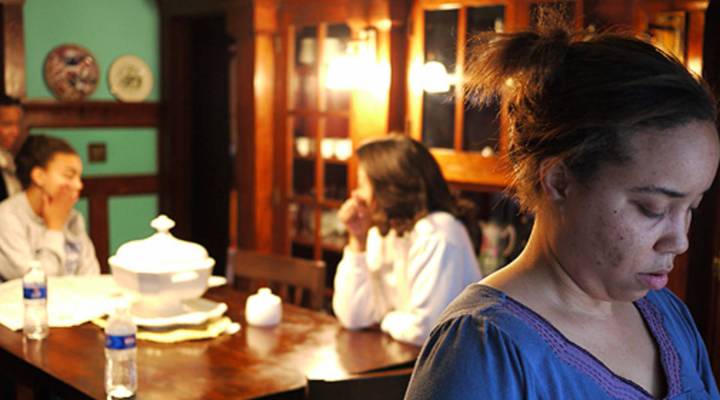 The financial lives of the ‘Boomerang Generation’

COPY
Courtney McNair, 25, prepares dinner for her parents and two sisters at her childhood home in Los Angeles. Josh Rogosin/Marketplace
Through The Ages

The financial lives of the ‘Boomerang Generation’

If you’re lucky like Mino, you got some money counseling early on. But if you didn’t, and you graduated into the worst economy since the Great Depression?

Courtney: Um, salmon and chicken — if the microwave starts working…?

You might very well find yourself cooking dinner at the same address you had in high school. Living in the same bedroom. Working part-time for your dad.

That’s 25-year-old Courtney McNair’s life. Three years after graduating from Wellesley College in Massachusetts with a degree in political science and Spanish.

Courtney: I still have hope that I’ll, you know, win the lotto or something and be able to get my own place anyways.

Vigeland: Would it take the lotto at this point for you to be able to do that?

Cooking dinner four nights a week is how McNair pays the rent, so to speak, at her childhood home in the West Adams neighborhood of Los Angeles. Her folks don’t charge actual rent, because they know her money has to go toward other serious expenses: $40,000 in student loan debt, $2,000 in credit card bills and $10,000 still to go on a car payment.

But McNair appears surprisingly nonplussed about her situation.

Courtney: I always assumed I’d live at home for a little while, save up money and go.

Vigeland: A little while being?

Courtney: Maybe a year or two? People in my generation, maybe their parents aren’t as quick to kick them out.

After she graduated in 2008, McNair took the first job she was offered as a match coordinator with the Los Angeles Boys & Girls Club. It paid $25 an hour. But the she decided what she really wanted to do was teach special ed. Now she’s back in school getting her master’s degree. She’s also tutoring and working part-time for a family foundation that provides low-cost legal services for special needs students.

Her parents, both lawyers, run the foundation. Dad, Greg, pays her $13 an hour. The two of them meet at least once a week for lunch at the family dining room table.

Greg: Did you get any information from Sgt. Barlow about the boot camp program?

Courtney: No, he contacted you or at least that’s what you said.

McNair is part of what’s being called the “Boomerang Generation.” They’re saddled with huge student loans and a lousy job market. But what’s most curious is that they don’t seem to mind.

That’s something McNair’s mother, Margaret, has a tough time understanding.

Margaret: It seems as though they’re afraid and that’s a big change. You know, when I was in my 20s, I could not wait to get out there. I still think that every now and then, I could use a reality check when someone tells me that they can’t find a job.

Lauren Lyons Cole: You don’t want to assume more student loan debt than what your salary will be when you graduate.

Lauren Lyons Cole is a 29-year-old certified financial planner in New York City. She says McNair’s student debt load is pretty typical for her generation. And like many 20-somethings, Courtney hasn’t done the math on what it’s going to take to be in good financial shape.

Cole sas that McNair start by asking her father for a raise — advice she is choosing to ignore because she says it would be too awkward. But she might ask for a retirement fund contribution.

McNair is also among the many, many young people who leave school without learning how to manage money.

Courtney: I’ve always hated money. Don’t like it. I’m scared of it.

Courtney: I don’t know! I think it was because when I was little, my grandma, who we lived with for a little bit before she passed away, she was horrible with money. She would blow through it at the end of the month. she had no money. No money!

So Cole’s advice is as simple as it gets: Make a budget. She reviewed Courtney’s finances and found she has about $200 left after paying all her expenses each month. She said $80 of that should go directly into a savings account. The rest, to a weekly allowance for herself.

Once she has that habit down, Cole says, she needs to dream big. Think about how she wants her future to play out, and how she’s going to fund that future. It’s a future McNair isn’t exactly rushing toward.

Courtney: I figure if I’m 30 and living at home, there’s something wrong.

But now at least, she has some tools to start a financial journey.

Courtney: I’d like to have savings. I love to travel. On my bucket list is to visit all seven continents and I’d love to be able to that someday. Sooner than later.

That bucket list, of course, is going to cost money. And the reality of her student loans and other bills may put those dreams off for longer than she’d like. But one thing about Cole’s advice stood out for McNair: At least, she says, she didn’t think I’m the worst money handler in the world.